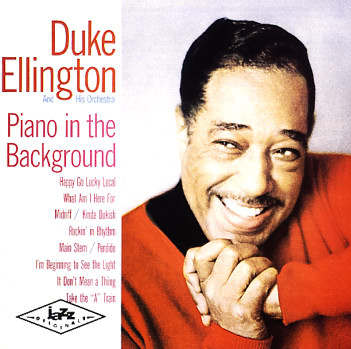 Piano In The Background (with bonus tracks)

Don't let the title put you off, because this certainly isn't a session of background music – and the name simply refers to the fact that the arrangements on the set really showcase the strong horn work of the Ellington orchestra! Duke's still on piano for the session, but the real strength of the album's carried by classic Ellington players that include Ray Nance, Willie Cook, Johnny Hodges, Jimmy Hamilton, Harry Carney, and Lawrence Brown. Arrangements are by Bill Mathieu and Gerald Wilson – and although many of the tunes are older Ellington numbers, they've got a tight groove (and excellent recording quality) – which updates the material nicely. Titles include "Midriff", "Main Stem", "Happy Go Lucky Local", "What Am I Here For", "Kinda Dukish", and "Perdido". CD features 5 bonus tracks – "Lullaby Of Birdland" (in 2 versions), "The Wailer", "Dreamy Sort Of Thing", and "Harlem Air Shaft".  © 1996-2022, Dusty Groove, Inc.
(Still sealed.)

In A Silent Way
Columbia, 1969. Used
CD...$1.99
There's nothing "silent" here – as the album's a bold entry in the electric years of Miles Davis – one that still features contributions from Herbie Hancock, Wayne Shorter, and Tony Williams – but which also expands the lineup considerably – really reaching out ... CD