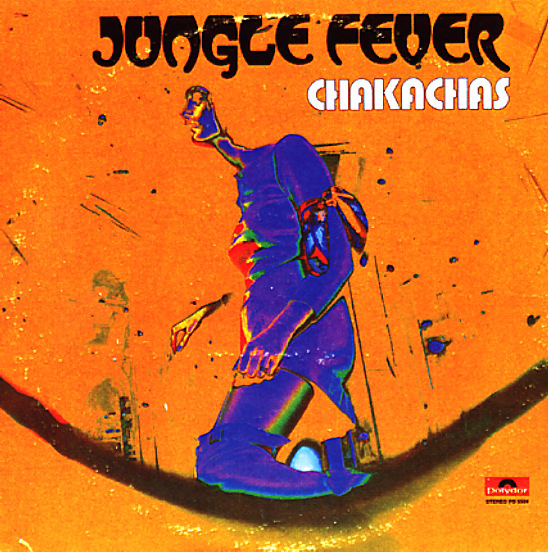 A mad mix of Latin and funky rhythms – a 70s classic from the Belgian group Chakachas! The album's best known for its title hit "Jungle Fever" – an insane cut that features heavy drums, choppy guitar, and a stop/start action that's peppered with sounds of female pleasure! The track was a worldwide hit, and continues to be a funky classic today – thanks to a heavy sample history, and a life in playlists worldwide – but the rest of the album's pretty darn great too, and even weirder. Some tracks mix easy Euro grooving with heavy conga, others have kind of an LA Chicano funk approach, and still others throw in some mad horns to complicate matters with nice jazzy riffing. Really great throughout – and maybe one of the best funky albums to ever come out on a major label! Titles include "Jungle Fever", "El Canyon Rojo", "Chica Chica Bau Bau", "Eso Es El Amor", "Ay Mulata", "Cha Ka Cha", "Latin Can Can", and "Yo Soy Cubano".  © 1996-2022, Dusty Groove, Inc.
(Out of print and still sealed.)

Extrasensory Perception
ABC/Dusty Groove, 1974. Used
CD...$11.99
Majestic music from the mighty Popcorn Wylie – the Detroit soul legend best known for his work in the 60s, but an artist who really shines on this rare 70s set for ABC! The album was done during the same stretch as Lamont Dozier's ABC work – and like those records, this set features ... CD

Bill Cosby Presents Badfoot Brown & The Bunions Bradford Funeral & Marching Band
Uni/Dusty Groove, 1971. Used
CD...$4.99
A funky masterpiece from Bill Cosby – hardly the sort of record you might expect from all of his years on mainstream TV! This set was cut back when Bill was a much hipper cat on the LA scene – and it was the start of a brief all-instrumental run with his Badfoot Brown ensemble – ... CD