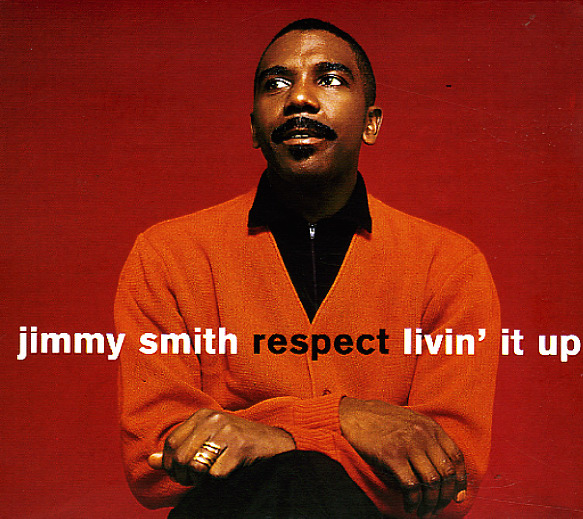 Respect/Livin' It Up! (with bonus track)

A pair of near perfect soulful jazz organ sets from Jimmy Smith – 1967's Respect and 1968's Livin' It Up – plus the rare non album single "Mickey Mouse" as bonus track for the first time on CD! Respect is really nice jazz album from Jimmy, although one that got hidden in the years of Jimmy's more "concept" oriented sessions for Verve. Most of the material is quartet stuff, with players like Bernard Purdie, Eric Gale, and Ron Carter backing up Jimmy's soulful organ. The tracks are longer than usual too, with lots of nice soloing going on, and a stone easy soul groove. Includes a tasty loping version of "Get Out Of My Life", with a very different drum groove than usual, plus "Funky Broadway", "T Bone Steak", and "Mercy, Mercy, Mercy". Livin' It Up is a straight up stunner – and quite possibly one of his greatest records for Verve! The set has Jimmy working with arranger Oliver Nelson – in a setting that's got big band backings, but done in a style that's cool enough to cut through all the BS of similar sessions. There's no hoke at all – just a lean and soulful approach that has Nelson serving up a powerhouse jazzy groove underneath – and Jimmy soloing madly over the top! The album's filled with great tunes too – including a fab cover of "Mission Impossible", the original "Big Boss Man", a version of Richard Evans' "Burning Spear", a great takes on "Valley Of The Dolls" and "The Gentle Rain". Great stuff throughout!  © 1996-2021, Dusty Groove, Inc.
(Out of print, limited edition. Case has some light edgewear.)