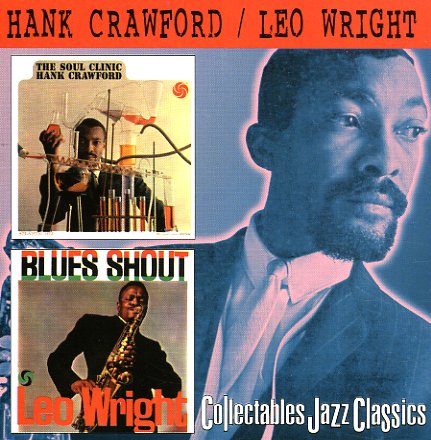 2 lost soul jazz classic from the Atlantic catalog! Hank Crawford's Soul Clinic is one of the few albums we really like by him, and it features the soulful altoist playing in a group with David Fathead Newman and some other lesser-known players who are nice and soulful. The set's got some warm mellow instrumental versions of blues classics, plus a few originals like "Lorelei's Lament", "Blue Stone", and "Playmates". Even better is Blues Shout, one of the rare few albums cut by the amazing alto and flute player Leo Wright. The record's got a beautiful mix of soul jazz and slightly modern lyricism, and Wright's tone and projection are impeccable throughout. Titles on the record include "Sigi", "Blues Shout", "Indian Summer", "The Wind", and "Two Moods" – and players include Junior Mance, Richard Williams, and Charlie Persip.  © 1996-2021, Dusty Groove, Inc.
(Out of print.)