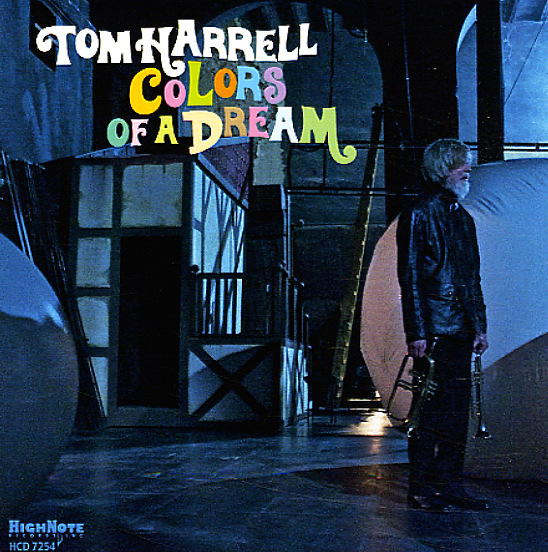 Colors Of A Dream

A beautiful beautiful set from trumpeter Tom Harrell – a record that goes even beyond his other recent gems – and that's saying a lot, given how much we love those albums! The combo on the record features some key vocal work from Esperanza Spaulding – who's sounding quite different here than her more recent sides, and has moved back to using her vocals more like an instrument – soaring out soulfully in a sharp lineup that includes Tom's trumpet and flugelhorn, Jaleel Shaw's alto, and Wayne Escoffery's tenor! This side of Spaulding is really wonderful – and really helps realize the deeper tones and ideas in Tom's wonderful compositions for the record – a set of tunes that include "Velejar", "Phantasy In Latin", "Tango", "State", "Seventy", "Blues 2013", and "Family".  © 1996-2021, Dusty Groove, Inc.

First Impressions
High Note, 2015. Used
CD...$12.99
Stunning work from trumpeter Tom Harrell – a player who's been making records for decades, but who really seems to be hitting a creative high point in his great flurry of recent albums! This sparkling set is one of Harrell's best of the bunch – a set that's got Tom blowing in these ... CD

Elementals
High Note, 2018. Used
CD...$11.99
Saxophonist Azar Lawrence has been having a hell of a renaissance in recent years – and a record like this only helps move that process forward – providing a mighty large feather in Azar's ever-growing cap! The album's a great one from start to finish – a evolution of the ... CD

Noir En Rouge – Live In Paris
High Note, 2018. Used
CD...$11.99
A really great live set from trumpeter Jeremy Pelt – who seems to use the format to open up with even more bold energy than his recent studio albums! There's a freewheeling vibe here that reminds us of the way that Freddie Hubbard could really transform in a live setting – both searing ... CD

Armor Of Pride
High Note, 2018. Used
CD...$8.99
A set that's bursting with every bit as much of the fantastic energy you might expect from the lineup – a bold sextet that features Wayne Escoffery on tenor, Jeremy Pelt on trumpet, James Burton III on trombone, Xavier Davis on piano, Vicente Archer on piano, and Johnathan Blake on drums ... CD