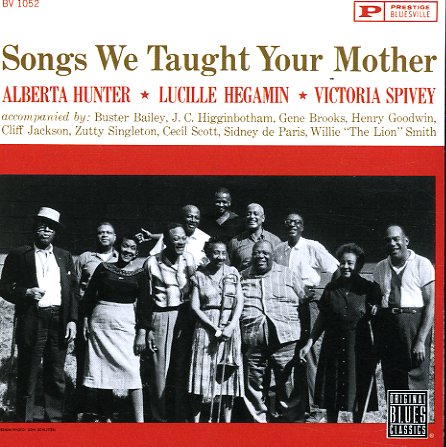 Also available
Alberta Hunter/Lucille Hegamin/Victoria Spivey — Songs We Taught Your Mother ... LP 28.99
Raw, rootsy blues – recorded by a trio of gals who are definitely old enough to have taught your mom a few songs! The set's got a mixed blues/jazz vibe – that sweet 20s/30s mode when the two genres would often blur nicely together – and players include Sidney De Paris on tuba, JC Higginbotham on trombone, Buster Bailey on clarinet, Cliff Jackson on piano, Henry Goodwin on trumpet, Cecil Scott on clarinet, and Willie The Lion Smith on piano. Singers alternate tracks on the set – and titles include Albert Hunter singing "I Got Myself A Workin Man" and "I Got A Mind To Ramble", Lucille Hegamin singing "St Louis Blues" and "You'll Want My Love", and Victoria Spivey singing "Black Snake Blues" and "Got The Blues So Bad".  © 1996-2022, Dusty Groove, Inc.
(Out of print.)

Idle Hours
Prestige/Bluesville, 1961. Used
CD...$5.99
Beautiful late work from Lonnie Johnson – recorded decades after his bigger years on record, but handled with great care by Prestige Records, during the brief run of its Bluesville imprint! Like most of the rest of the sides at the time, the approach here is to make an older mode live again ... CD

Folk Singer
Chess (Russia), 1963. Used
CD...$3.99
A seminal album by Muddy – recorded in a style that's rootsier, and more down to earth than a lot of his other Chess sides! Muddy's playing acoustic guitar, and the group features Buddy Guy, Willie Dixon, and Clifton James. The sound is really spare, evocative, and true – the album ... CD

Complete Recordings
Definitive (Spain), 1936/1937. Used 2CD
CD...$3.99
All 41 recordings of Robert Johnson – a lasting legacy of music that's still one of the touchpoints for any exploration of early blues! CD