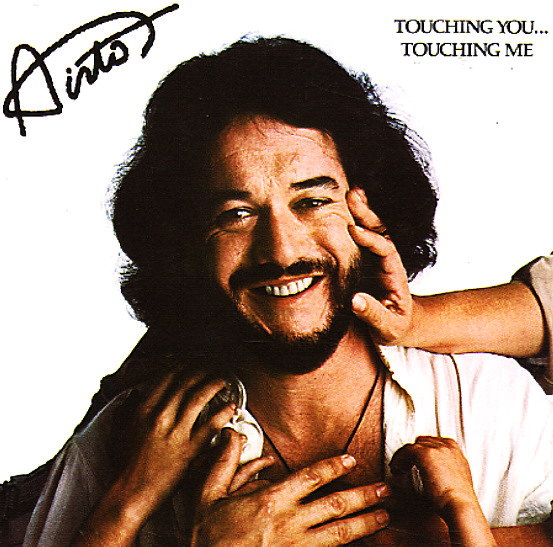 Touching You, Touching Me

One of Airto's most polished records, and an album that we've really grown to love over the years! There's a pretty strong modern soul/R&B component to the album – but at the core, there's still a strong feeling for Brazilian rhythms, and the record's got a wonderfully warm Brazilian fusion component. Marcos Valle arranged many of the tracks with Airto, and the record's similar to some of his excellent R&B-ish work from the early 80s, particularly the stuff he did after working with Leon Ware. Great players and singers on the sessions, too – including George Duke, Herb Alpert, Flora Purim and The Sweet Inspirations. Tracks include "Heartbeat", "Amajour", "Partido Alto", "Open Space", "Tempos Atras", and "And Then We Touched The Sky".  © 1996-2022, Dusty Groove, Inc.
(Out of print.)

O Eterno Deus Mu Danca
Warner, 1989. Used
CD...$1.99
Gilberto Gil gets off to a nicely soulful start here – by bringing in a guest appearance from Ed Motta on the album's title track – then keeping things in a nice mix of samba and soul throughout the entire album! There's a few slight touches of 80s production, but overall there's a lot ... CD

Elis, Essa Mulher
Warner (Brazil), 1979. Used
CD...$8.99
Really great late work from Elis Regina – recorded in the company of arranger Cesar Mariano, whose masterful touch made for some of Elis' best albums of the 70s! Cesar arranged and conducted here, and although the production is perhaps a bit more contemporary than Elis' work for Philips, the ... CD

To Be Alive Is Good (Anos 80)
Warner (Brazil), 1980s. Used
CD...$9.99
A great collection of work by Gilberto Gil – tracks recorded throughout the 80s, and done in a variety of styles, all of which show him at his best during the time! Lots of the tunes step off the smooth soul and funkier modes of the late 70s, taking Gil into the strongly R&B-influenced ... CD

Belchior (1974)/Belchior (1979) – Serie Dois Momentos
Warner (Brazil), 1974/1979. Used
CD...$19.99
Two great albums from Belchior! The 1974 album features arrangements and music are handled by Marcus Vinicius – who uses quick-stepping samba elements on some of the best tracks, mixed with more modern funky styles in this really great way – which creates even more magic with the ... CD

Inutil Paisagem
Polygram (Brazil), 1964. Used
CD...$12.99
Beautiful airy bossa! This album's a 1964 session of straight piano bossa tracks by Deodato, with production by Roberto Quartin – and a sound that's a lot more mellow and fragile than his other records from the time! Deodato is amazingly restrained in his playing, and sticks to only piano ... CD