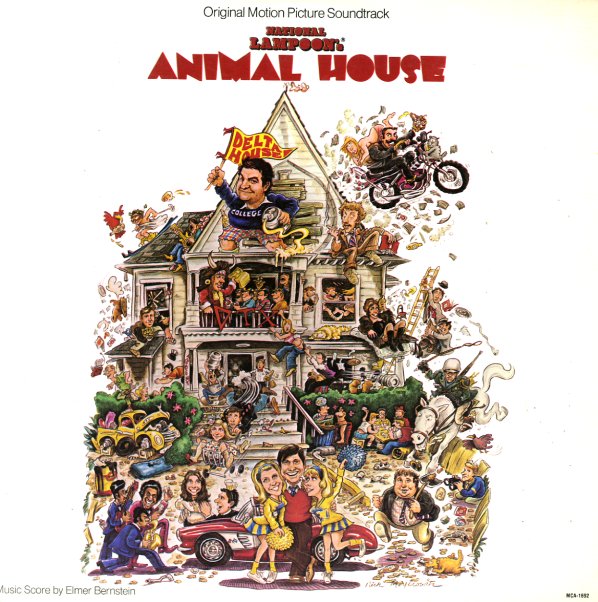 Scarface
MCA, 1983. Very Good+
LP...$49.99
Say hello to our little friend – the classic soundtrack to Scarface – a record that showed a whole new side of the talents of the legendary Giorgio Mororder! By the time of this set, Moroder had already broken the charts with disco productions, and turned out to be a groundbreaking ... LP, Vinyl record album

Band Of The Hand
MCA, 1986. Near Mint-
LP...$4.99
Maybe not the greatest film in the world, but a record that's well-remembered for the title track "Band Of The Hand" – performed by Bob Dylan with The Heartbreakers! Also features tracks by The Reds, Andy Summers, and Shriekback. LP, Vinyl record album

A Venezia Un Dicembre Rosso Shocking (aka Don't Look Now)
Carosello (Italy), 1973. Near Mint- Gatefold
LP...$9.99
A really spooky soundtrack from Pino Donaggio – even if the instrumentation is somewhat standard! The music is for the great Nicolas Roeg film Don't Look Now – set in a slowly rotting Venice, and filled with moody mystery and hints of horror – but all elements that never fully ... LP, Vinyl record album

Man & A Woman (aka Un Homme Et Une Femme)
United Artists, 1967. Very Good+
LP...$9.99
One of the greatest soundtracks ever – an archetypal album from French composer Francis Lai, and a record that set the tone for countless other imitations to come – yet which is still the best! The groove here is really unique – a spare blend of bossa influences, jazzy organ ... LP, Vinyl record album

Rogues – Original Soundtrack
RCA, 1964. Very Good+
LP...$7.99
A wonderful lost Nelson Riddle soundtrack – scored for the "gentlemen criminal" show The Rogues, which ran briefly on NBC during the mid 60s – starring Charles Boyer, Gig Young, and David Niven! The work is some of our favorite by Riddle during the period – lightly ... LP, Vinyl record album

Party
RCA, 1968. Near Mint-
LP...$13.99
A great Mancini score for one of the goofiest films of the 60s! Peter Sellers stars as the sitar-playing Indian actor Hrundi Bakshi – next to the lovely Claudine Longet, who makes one of her few film appearances – and the whole thing's set to one of the greatest scores ever by Henry ... LP, Vinyl record album