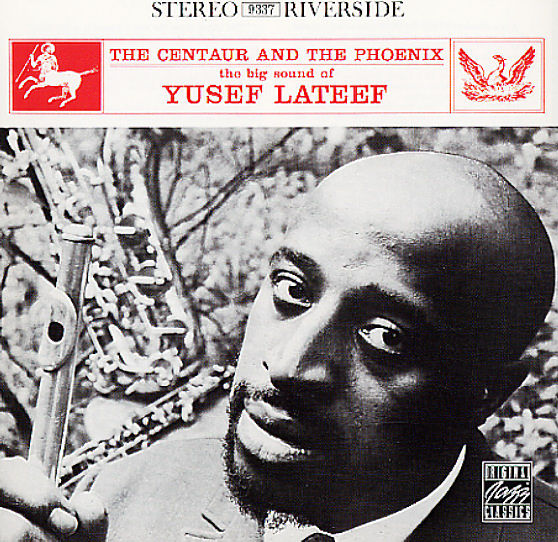 An ambitious larger group album from Yusef Lateef – and one that's carried off with all the genius of his smaller group sessions from the time! Yusef himself is working with a variety of reed instruments – including tenor sax, oboe, flute, and argol – amongst a larger horn section that also features Josea Taylor on bassoon, Tate Houston on baritone sax, Curtis Fuller on trombone, and Clark Terry and Richard Williams on trumpet. Rhythm is by the trio of Joe Zawinul piano, Ben Tucker bass, and Lex Humphries drums – and although the horn arrangements are complicated, they're always soulfully swinging – never too academic, and really done on a way that just expands the mixture of exoticism and hardbop expressed on other Lateef albums! Titles include "Iqbal", "Apathy", "Summer Song", "Revelation", and "The Centaur & The Phoenix".  © 1996-2021, Dusty Groove, Inc.
(Mono blue label Bill Grauer Productions Inc pressing with microphone logo. Cover has light wear.)

Sounds Of Yusef
Prestige, 1957. Very Good+
LP...$29.99
A beautifully haunting set by Yusef that marked his move to Prestige, and a sophistication of the Eastern-tinged jazz style that he developed during his years with Savoy. The tracks on here feature Yusef playing tenor, flute, and argol – with backing by a group of Detroit musicians that ... LP, Vinyl record album

This Is Yusef Lateef (aka Three Faces Of Yusef Lateef)
Riverside, 1960/Late 60s. Very Good-
LP...$4.99
Sublime work from Yusef Lateef – and proof that he could be exotic and swinging at the same time! The three "faces" of the set are Lateef's work on tenor, flute, and oboe – each of which get a few tracks to themselves – as Lateef works with a core Detroit group of Hugh ... LP, Vinyl record album

Black Coffee
Riverside, 1962. Very Good-
LP...$11.99
One of Johnny Hammond's first albums – and a cooking little live set that really has the organist working with some early raw power! The group's a trio, but they seem to burn differently than some of the other organ combos of the time – maybe with that fluid sensibility that Johnny ... LP, Vinyl record album

Latin Impressions
Riverside, Early 60s. Very Good-
LP...$7.99
The Latin Impressions here are more Brazilian than Cuban – and maybe a bit Spanish, too – given the strong use of acoustic guitar from Charlie Byrd! The set's got a laidback, open feel – and Byrd's guitar work is mighty deft, yet without all the frills and flowers of some of the ... LP, Vinyl record album

Time Remembered (2LP – Bill Evans Trio At Shelly's Manne-Hole)
Riverside/Milestone, 1963. Near Mint- 2LP Gatefold
LP...$59.99
A great west coast live date from Bill Evans – one that showed that his magic on the keys was equally at home in LA as it was in New York! The session's especially noteworthy for the presence of drummer Larry Bunker – a great player who worked on countless recordings, both jazz and non- ... LP, Vinyl record album

Uptown
Riverside, 1960. Very Good-
LP...$11.99
A pretty great trio date from Billy Taylor – and somewhat overlooked, too! The group features Henry Grimes on bass and Ray Mosca on drums – and the set captures Billy in a perfect spot between his early work for Prestige, and some of his 60s mainstream material – heard here in a ... LP, Vinyl record album

Classic Swing Of Buck Clayton
Riverside, 1946. Near Mint-
LP...$19.99
A 60s album, but one that brings together earlier small combo work from trumpeter Buck Clayton! The set features work from his Big Four combo, with Tiny Grimes on guitar; his Big Eight group with Trummy Young on trombone, George Johnson on alto, and Billy Taylor on piano; and Trummy Young's Big ... LP, Vinyl record album

Big Soul (Big Soul Band & White Gardenia)
Riverside/Milestone, 1960. Sealed 2LP Gatefold
LP...$9.99
One of those ubiquitous Milestone 70s two-fers combining two nice sides from the little giant. The first set is Big Soul Band, a sweet little album from Johnny – quite different than most of his other sessions at the time, as this one features a big band, as the title says – filled ... LP, Vinyl record album