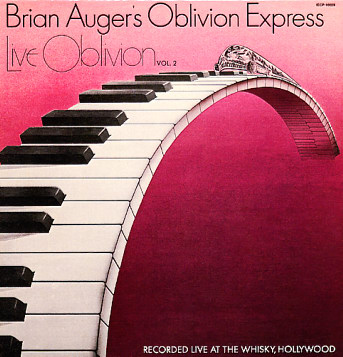 The second smoking Live Oblivion set from Brian Auger and crew – twice as long, and maybe even twice as funky as the first! The tunes on here all really push the ten minute mark – stretching out the original Auger conception on studio sides, and featuring plenty of room for really wicked solo work on organ and electric piano! The live setting seems to inspire the group to even greater new heights – and there's an intensity here that makes for some really great moments. Titles include the wonderful break-heavy version of "Compared To What" – plus "Second Wind", "Maiden Voyage", "Straight Ahead", "Freedom Jazz Dance", and "Inner City Blues".  © 1996-2022, Dusty Groove, Inc.
(Vinyl is in great shape, but cover has a cutout notch, ring and edge wear, bent corner, and half split top seam.)