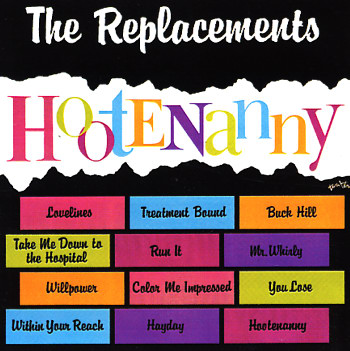 Ahhh . . . The young genius of The Replacements! A bit punk, a bit garage, with a heartfelt quality that you didn't always find in indie rock at the time. These rough hewn gems are already as brilliant as they can be – shiny little diamonds that show Westerberg and crew working at top form, possibly topper than they'd ever be at in later years. Every single track is fantastic – and the album dances from number to number with delight, an endless array of great hooks, soulful vocals, and searing guitar bits that are laid out with early 80s economy! Titles include "Take Me Down To The Hospital", "Run It", "Color Me Impressed", "Within Your Reach", "Buck Hill", and "Treatment Bound".  © 1996-2022, Dusty Groove, Inc.
(80s Twin Tone pressing – still sealed! One corner has been bumped and creased, but the album's never been opened, and the rest is great!)

Pleased To Meet Me
Sire, 1987. Near Mint-
LP...$69.99
One of their best! After a tumultous tour for Tim, Bob Stinson left the band and they essentially recorded Pleased To Meet Me as a trio as far as the core band goes, but went down to Memphis to record with Jim Dickinson, and too our ears, that little bit of southern swagger, as paired with The ... LP, Vinyl record album

More Places Forever
Twin Tone, 1985. Near Mint-
LP...$11.99 14.99
Post-Pere Ubu work from David Thomas – a set that features his mad sense of lyricism and vocalizing in a group with Lindsay Cooper on reeds, Tony Maimone on bass, and Chris Cutler on drums and "flotsam"! LP, Vinyl record album