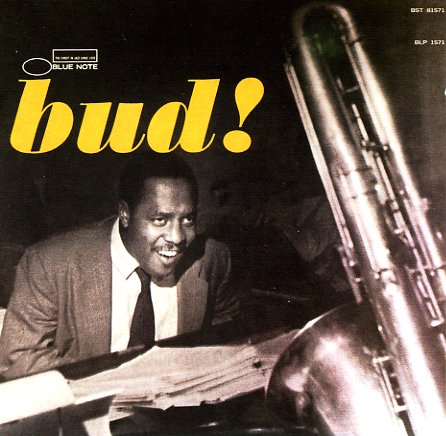 One of the few rare non-trio recordings done by Powell from around this time. Bud plays with a trio (Paul Chambers bass, Art Taylor drums) on the whole first section of the record, but the group's then joined by Curtis Fuller for the rest of the set. Fuller's deep trombone makes for a different twist, and a slightly deeper sound than usual – especially given that the album was recorded live at Birdland. Titles include "Moose The Mooche", "Some Soul", "Blue Pearl", and "Keepin' In The Groove". CD also features an alternate take of "Blue Pearl".  © 1996-2022, Dusty Groove, Inc.
(Out of print.)

Time Waits – The Amazing Bud Powell Vol 4
Blue Note, 1958. Used
CD...$9.99 (LP...$23.99)
A great little record, and one that shows just why Blue Note chose to put "amazing" in the title of every Bud Powell album they released! The set's a live one, done at Birdland – and Bud's working here with a trio that features the young Sam Jones on bass and Philly Joe Jones on ... CD

Birdland 1953 (3CD set)
ESP, 1953. Used 3 CDs
CD...$24.99
A comprehensive set of live recordings by Bud Powell – recorded in that magical year of 1953, on location at the Birdland nightclub! This set's the biggest and best we've ever seen of these performances – and not only includes a wealth of trio tracks, but also some cuts with Charlie ... CD

Blues In The Closet (Japanese paper sleeve edition)
Verve (Japan), 1956. Used
CD...$24.99
The title gets it right – as the album's definitely one of the most bluesy ever cut by Bud Powell for Verve – a sweet little set with a sound that's slightly gentler than usual, but still filled with plenty of dark corners and modern tones! The trio here features Ray Brown on bass and ... CD

Piano Interpretations By Bud Powell/Blues In The Closet
Lonehill (Spain), 1955/1956. Used
CD...$14.99
Piano Interpretations' way more than just a sense of "interpretations" – because with Bud Powell at the helm, everything here is remade anew! The album's possibly the most focused of Powell's mid 50s sides for Verve – George Duviver on bass and Art Taylor on drums – and ... CD