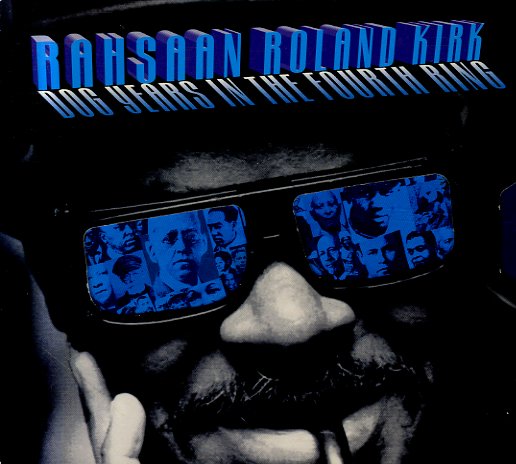 One of the greatest contributions made by the 32 Jazz label so far has been the rich amount of classic Roland Kirk material they've released on the market. The best of Kirk's work has been out of print for years, and like the folks at 32 Jazz, we think that's a darn shame – which is why we're extra-excited about a set like this! This nicely (and strangely) packaged 3 CD set features 2 CDs worth of previously unreleased live material – recorded in the years 1964 to 1975, by jazz recordist/archivist George Bonafacio. The material is amazing, and definitely gives proof to the claim that Kirk's live sets were even more amazing than his studio recordings. There's a wealth of great stuff here that really opens up an understanding of Kirk's 60s and early 70s years – and titles include "Rahsaantalk", "Misterioso", "Jammin With A Wolf", "Sister Sadie", "Blues For Alice", and a very groovy "Multi-Horn Medley". And if that's not enough, the 3rd CD of the set features the totally rare Natural Black Inventions album, which Kirk recorded for Atlantic. The record's got an amazing sound: Roland plays solo (mostly), and without the aid of overdubbing, to create these amazing soundscapes of multiple horns and circular breathing. It's filled with these fantastic throbbing pulsating reed lines, with one horn blowing rhythm, and one playing an adventurous solo – and both being blown live a the same time! Tracks include "Black Root", "Raped Voices", "Day Dream", and "Something For Trane That Trane Could Have Said". 3 great CDs of material by one of our favorite-ever reed players – and nicely priced, if we do say so ourselves!  © 1996-2022, Dusty Groove, Inc.
(Out of print. Includes original die-cut slipcase – in nice shape too!)

Aces Back To Back (Left & Right/Rahsaan Rahsaan/Prepare Thyself To Deal With A Miracle/Other Folks Music) (4CD set)
32 Jazz, Late 60s/Early 70s. Used 4 CDs
CD...$19.99
Nice one! A whopping 4CD set that brings together 4 of Roland Kirk's best late albums for Atlantic! Left & Right is an undisputed classic, and has Roland leading a large group of musicians through a haunting batch of complicated tracks that clearly illustrate his much-heralded concept of ... CD

Breakthrough (32 Jazz)
32 Jazz, 1972. Used
CD...$14.99
One of the last great albums that Hank Mobley ever cut! Although Mobley's 70s output was nothing compared to his 60s Blue Note work, this 1972 session for Cobblestone/Muse is a winner, and features the aging tenorist co-leading a crack quintet with Cedar Walton, and featuring Billy Higgins, Sam ... CD