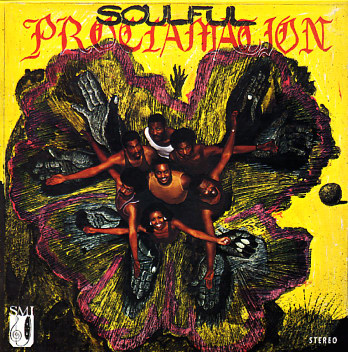 Ultra-hip funk from Oklahoma's Messengers Incorporated – a group who come across with a sound that's every bit as righteous and heavy as you might guess from the cover! Instrumentation is heavy on bass, guitar, and organ – and topped with some great saxophone work too – all in a sound that's draws plenty of inspiration from righteous jazz of the early 70s, but which focuses the sound into a more funk-based approach overall. Vocalists shift throughout – and include singers Barbara and Charles Burton, later of Burton Inc – who help give the record as much of a soul-based punch alongside the jazzy instrumentation of the combo! The whole thing's a real heavy hitter – the kind of album that could have soared large, had it gotten wider release back in the day – and titles include "Rejoice", "Just Can't Run Away", "Soulful Proclamation", "Frequency Response", "Ain't No Mountain", "Twenty Four Hours A Day", and "If I'Da Club".  © 1996-2023, Dusty Groove, Inc.

Disco Party
Jazzman (UK), Mid 70s. New Copy
CD...$12.99 16.99 (LP...$24.99)
A rare gem of a record that's every bit as much a funk party as the disco celebration promised in the title – done with this lean, stripped-down vibe that often hits some of the same fast funk territory as late 70s gems from the P&P family of record labels! There's a nicely offbeat vibe ... CD

El Leon Bailarin
Sonar Kollektiv/Oom Dooby Dochas (Germany), 1980. New Copy
CD...$6.99 16.99
A killer set of tropical disco – a record that's maybe a much better illustration of the mode than some of the bigger US albums of the style – even though the mighty Daniel Grau hardly ever got his due back in the day! That's partly because Daniel was working far from the limelight in ... CD

Disco Fantasy
Oom Dooby Dochas/Sonar Kollektiv (Germany), 1979. New Copy
CD...$5.99 16.99
Sweet clubby sounds from a very obscure source – the mighty Daniel Grau, an artist who was working on the Venezuelan scene at the end of the 70s – and hardly ever got the exposure of American or European disco artists at the time! The album's way more than a fantasy – as Grau is ... CD