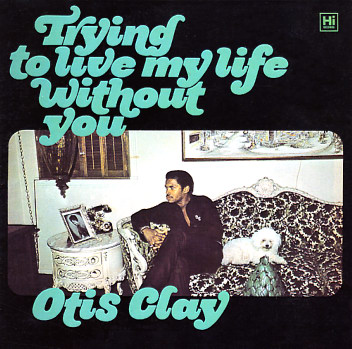 Trying To Live My Life Without You

Quite possibly the most successful record Otis Clay ever cut – and a wonderful little set that recasts his bluesy Chicago vocals with a sweeter Memphis soul approach! Willie Mitchell is very firmly in the house for the record – and the approach he uses here with Otis is similar to that he used with Al Green on his biggest hits – slow-burning, slinkily soulful – in a way that infuses older modes of singing with a new level of sophistication and adult appeal! Backing is by the Memphis Horns – shimmering nicely in a trademark Hi sort of way – and titles include the classic "Trying To Live My Life Without You", plus "I Love You, I Need You", "Holding Onto A Dying Love", "I Die A Little Each Day", and "That's How It Is".  © 1996-2021, Dusty Groove, Inc.

Harlem Pop Trotters (180 gram colored vinyl pressing)
Kif/Underdog (France), 1975. New Copy (reissue)
LP...$26.99
A massive bit of funk – and from 70s France, no less! These guys clearly come from a jazz-based background – and have absorbed some of the best electric influences of their time – working in a keyboard-heavy mode that's clearly inspired by Herbie Hancock, Joe Zawinul, and George ... LP, Vinyl record album