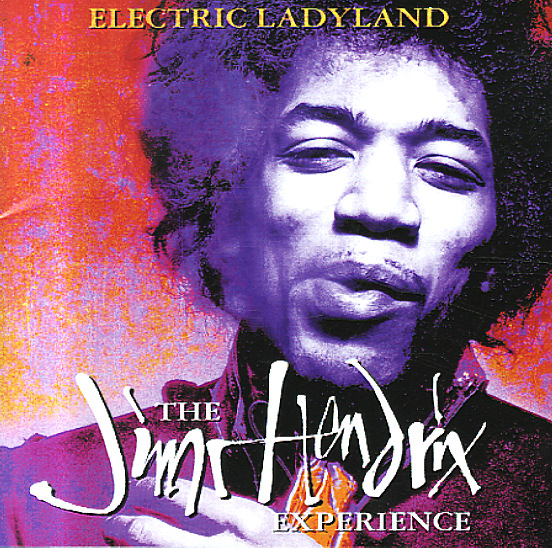 A true classic by Jimi with the original Experience lineup – the third of three straight up masterpiece LPs to comeout in just over a year's time by the group! You could call the leftfield astral effects in the mix experimental if you had to – innovations in the studio with echo, that hallucinatory backwards sound effect and other stranger bits – but the passionate, naturally expressive playing and singing by Jimi makes it all fell just right, and the Noel Redding and Mitch Mitchell still don't get enough credit for being at the heart of such greatness. A massive 2LP effort that include s"Voodoo Chile", "Crosstown Traffic", "Electric Ladyland", "Little Miss Strange", "Moon Turn The Tides", "Still Raining Still Dreaming" and "All Along The Watchtower".  © 1996-2021, Dusty Groove, Inc.
(BMG Direct pressing.)

Axis Bold As Love (CD/DVD)
Legacy, 1967. Used CD/DVD
CD...$9.99
The Jimi Hendrix Experience at their most classic! Tripped out bluesy cosmic rock ferocity and great songs, too – firing on all cylinders here on the middle record of their ultra epic three LP series of unimpeachable greatness. Titles include "EXP", "Up From The Skies", ... CD

Katy Lied
ABC/MCA, 1975. Used
CD...$4.99 (CD...$4.99)
Steely Dan really hitting the heights – moving into hipper, more sophisticated territory than before – pushing the envelope with both their music and lyrics, which are completely sublime! It's hard to put our finger on the magic of this one, but it's the perfect summation of everything ... CD

Katy Lied
ABC/MCA, 1975. Used
CD...$4.99 (CD...$4.99)
Steely Dan really hitting the heights – moving into hipper, more sophisticated territory than before – pushing the envelope with both their music and lyrics, which are completely sublime! It's hard to put our finger on the magic of this one, but it's the perfect summation of everything ... CD

Pretzel Logic
MCA, 1974. Used
CD...$6.99 (CD...$5.99)
Magical music from the team of Donald Fagan and Walter Becker – one of those records that seems to state its existence in simple, straightforward terms – but which is also filled with undeniably complex moments! There's a definite echo of older jazz here – heard famously in the ... CD