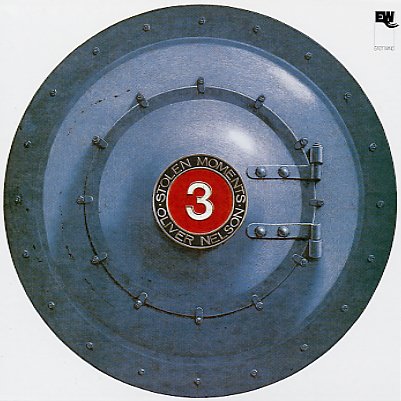 One of the last sessions Oliver Nelson ever recorded – a genius batch of work recorded for the Japanese East Wind label, and maybe one of his greatest albums ever! The set's a wonderful link between the sophisticated large group sounds that Nelson did for Impulse Records in the 60s, and some of the more expansive styles he was trying out on the Flying Dutchman imprint in the 70s – a batch of work that both has that sense of majesty that Nelson could command at his best, but which still retains an earthy vibe overall. The group is great – with soulful work from Bobby Bryant on trumpet, Jerome Richardson on soprano sax and flute, Buddy Collette on tenor and flute, and Jack Nimitz on baritone – and the rhythm section has some great Fender Rhodes from Mike Wofford, given more push from the electric bass of Chuck Dominico, and some open-ended drum work from Shelly Manne. Titles include a wonderful remake of Nelson's "Stolen Moments", the groover "Mission Accomplished", and the tracks "St Thomas", "Three Seconds", and "Yearnin".  © 1996-2022, Dusty Groove, Inc.
(US pressing on Inner City. Cover has a cut corner and is lightly bent at the top right.)

Blues & The Abstract Truth (profile cover)
Impulse, 1961. Very Good
LP...$74.99
One of the all-time classics of early 60s mainstream jazz – and a beautiful record that showcases writing and arranging talents of Oliver Nelson! Nelson had been bumping around a variety of sessions before this one – as a leader, sideman, and arranger – but it was with this album ... LP, Vinyl record album

Meet Oliver Nelson
New Jazz, 1959. Near Mint-
LP...$34.99
Although Nelson went on to become a very successful pop jazz arranger during the 1960s, this early 1959 album features him as a bright new jazz soloist – with a keen talent for blowing the alto with a tone that is at once soulful and lyrical, yet somehow darkly edgey. The session features a ... LP, Vinyl record album

Full Nelson
Verve, 1963. Very Good Gatefold
LP...$11.99
Excellent work from one of our favorite arrangers! Nelson was a super-hip super-soulful genius who crafted some of the best charts in the 60s. He managed to work in a great amount of jazz where other arrangers would leave things cold – and on a record like this he manages to make a large ... LP, Vinyl record album

More Blues & The Abstract Truth
Impulse, 1963. Near Mint-
LP...$24.99
Oliver Nelson's follow-up to his classic Blues & The Abstract Truth session for Impulse – and like that one, a tremendous little album – filled with deep tones and wonderful colors in sound! The group here's a bit larger than before – an ensemble that includes Phil Woods on ... LP, Vinyl record album

Swiss Suite
Flying Dutchman, 1971. Very Good+ Gatefold
LP...$14.99
A killer set of searing soulful spiritual material from Oliver Nelson – and one of his best albums of the 70s! There's hardly anything "Swiss" in the music – save for the fact that it was recorded at the Montreux Jazz Fest – as the large ensemble recording has Nelson at ... LP, Vinyl record album

Milestones
East Wind/Inner City, 1978. Near Mint-
LP...$11.99
One of a number of late 70s milestones from the Great Jazz Trio – that sublime grouping of Hank Jones on piano, Ron Carter on bass, and Tony Williams on drums! Like the rest of their gems from the time, the album's got this simple, subtle brilliance – a way of approaching piano trio ... LP, Vinyl record album

Live
Enja/Inner City, 1977. Near Mint-
LP...$11.99
The young John Scofield is a player with an amazing command of chromes – this way of putting forth all these new changes in jazz, and really transforming the role of the guitar in the music with important 70s records like this! Scofield's part of a generation who maybe came to jazz while ... LP, Vinyl record album

Live At The Public Theater
Inner City, 1978. Near Mint-
LP...$19.99
A beautiful live album from a time when saxophonist Bennie Wallace had a mighty nice edge – this raw, raspy quality that really shines through here – thanks to a stripped-down trio setting that features Eddie Gomez on bass and Dannie Richmond on drums! The album's a lot freer at times ... LP, Vinyl record album

Dual Nature
Inner City, 1978. Near Mint-
LP...$7.99
Lew Tabackin looks a bit stiff on the cover of this one (who wouldn't, in a tan polyester suit?) – but the record's a surprisingly hip date, and a great chance to hear Lew away from his 70s big band with Toshiko Akioshi! As the title and cover imply, the album features Tabackin's "dual ... LP, Vinyl record album

Blues In Orbit (aka Gil Evans)
Inner City, 1969/1971. Near Mint-
LP...$8.99
A great record – and on that hardly ever shows up on the radar screen of Gil's career! The session was recorded with a very hip group that includes Billy Harper on tenor and flute, Elvin Jones and Alphonze Mouzon on drums, Joe Beck on electric guitar, and Herb Bushler on Fender bass. The ... LP, Vinyl record album