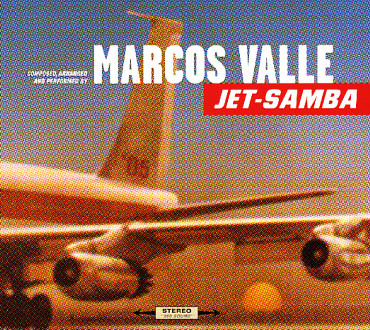 An all-instrumental set from the legendary Marcos Valle – beautifully jazzy, and filled with plenty of great work on Fender Rhodes! There's a style here that brings us back to the arrangements that Marcos used heavily on his Odeon work of the late 60s and early 70s (including his work with Joao Donato) – a mode that took inspiration from bossa, borrowed a bit more from American and European styles, and created a sound that was complicated, sophisticated, yet never failed to groove! The overall approach is a bit more modern here than on those albums, but there's a sense of gentle warmth and playfulness that we totally love – as Valle works with an octet that includes trombone, saxes, trumpet, and plenty of percussion – all warmly arranged with a surprising degree of soul. Valle's nicely departing from some of his recent albums for Far Out – offering us a whole new side of his talents, and one that could easily play well for fans of American electric jazz as well. Titles include "Jet Samba", "Bar Ingles", "Selva De Pedra", "Adams Hotel", "Vem", "Catedral", "Posto 9", "Previsao Do Tempo", and "Campina Grande".  © 1996-2022, Dusty Groove, Inc.
(Out of print. Still sealed!)

Samba Demais (with bonus tracks)
EMI (Brazil), 1964. Used
CD...$11.99
Rare early work from the great Marcos Valle – and one of his first-ever albums! The record's very much in a moody bossa mode, and the orchestrations are wonderful – light, but never sleepy – really done with that unique new bent that Brazilian artists were using at the time, best ... CD

Nova Bossa Nova
Natasha Imports/Far Out (Brazil), 1998. Used
CD...$8.99
The first album by Marcos Valle after years and years away from the studio – a set that really reintroduced his talents to a whole new generation! The set was recorded for the Far Out label in London – a then-new imprint who were doing a great job to bring back a Brazilian groove that ... CD

Viola Enluarada
Odeon/EMI (Brazil), 1968. Used
CD...$13.99
Fantastic! This lost late-60s album by Marcos Valle is a real treasure, and it offers a musical bridge between his earlier bossa nova material, and his later, more experimental work! The production is beautifully baroque, with a feel that's similar to some of the early albums by Milton Nascimento ... CD

Nova Bossa Nova
Far Out (UK), 1998. Used
CD...$5.99
The first album by Marcos Valle after years and years away from the studio – a set that really reintroduced his talents to a whole new generation! The set was recorded for the Far Out label in London – a then-new imprint who were doing a great job to bring back a Brazilian groove that ... CD