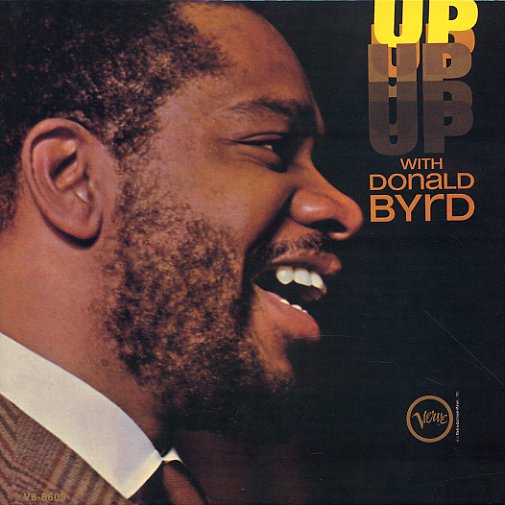 Up With Donald Byrd

A great album, and unlike anything else Donald Byrd ever recorded – almost mad hodgepodge of the styles Byrd used at Blue Note, as the session brings together funky soul jazz with vocal backings – linking the groove of At The Races with the choral stylings of A New Perspective! The session's the brainchild of arranger Claus Ogerman – who scored "The Donald Byrd" singers to back up a core group that features Blue Note stalwarts Herbie Hancock, Kenny Burrell, and Stanley Turrentine – plus some great soul jazz tenor work from Jimmy Heath. Verve scored something of a hit on the album – thanks to a tasty single version of Herbie's tunes "Blind Man, Blind Man" and "Cantelope Island" – but the whole thing's great overall, and other tracks include "My Babe", "Bossa", "You've Been Talkin Bout Me Baby", and "Boom Boom".  © 1996-2021, Dusty Groove, Inc.
(Stereo MGM pressing with deep groove and Van Gelder stamp. Cover has light wear and aging, with a small split in the bottom seam.)

Donald Byrd's Best
Blue Note, Early 70s/1975. Near Mint-
LP...$19.99
A tasty collection of goodies that Donald recorded with the great Larry Mizell during the early 70s. Certainly not his all-inclusive best, but some of our favorite material by this legendary soul jazz trumpeter. The tracks have a sparkling electric jazz funk sound, with amazing production that ... LP, Vinyl record album

Oscar Peterson Trio At The Stratford Shakespearean Festival
Verve, 1956. Near Mint-
LP...$16.99 (CD...$7.99)
A near-lost gem in Oscar Peterson's mid-50s catalog for Verve – and a sparkling set of trio numbers recorded at the Shakespeare Festival in Ontario! Despite the literate setting of the recording, the work's never stuffy or academic – and Peterson swings things mightily with his trio ... LP, Vinyl record album