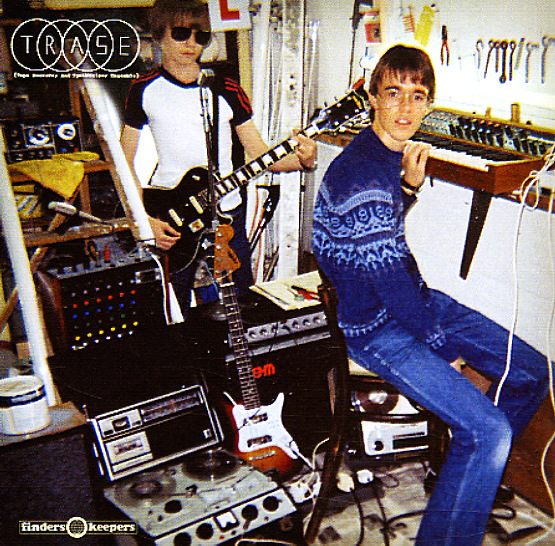 Never-heard sounds from this amazing UK duo – an early 80s outfit who went by the name of Tape Recorder & Synthesizer Ensemble – a very good choice, given the instrumentation on the set! Most of the music here is relatively spare, but surprisingly tuneful – kind of in a space between early Sheffield electronics and some of the catchier electro instrumental work of the mid 80s – often tweaked with experimental production and bits of tape, but usually just based around a guitar riff, a keyboard line, and a drum machine rhythm! Both musicians were in their teens at the time, and had no further aims of mainstream fame – but the record's easily as good as the best UK indie electronics on labels like Factory, Rough Trade, or Cherry Red at the time. Titles include "Sketch 1", "Harmonium", "Electronic Rock", "Talk To Me", "Unrequited Love", "We Are So Fragile", "This Life Of Yours", and "War Machine".  © 1996-2022, Dusty Groove, Inc.

Don & Stevie (UK pressing)
Finders Keepers (UK), Late 60s. New Copy
CD...$6.99 16.99 (LP...$19.99)
Darkly beautiful sounds from the duo of Don & Stevie Gere – a husband and wife who work here with a style that's folksy, but a bit spooky too – possibly due to the fact that the music within was recorded in their California home, and never issued for years! There's a deeply ... CD

Don & Stevie (UK pressing)
Finders Keepers (UK), Late 60s. New Copy
CD...$6.99 16.99 (LP...$19.99)
Darkly beautiful sounds from the duo of Don & Stevie Gere – a husband and wife who work here with a style that's folksy, but a bit spooky too – possibly due to the fact that the music within was recorded in their California home, and never issued for years! There's a deeply ... CD

Ding Dong Songs
Finders Keepers/Cache Cache (UK), Mid 80s. New Copy
CD...$6.99 16.99
Beautiful work from X Ray Pop – a totally wonderful French group from the 80s, and one with the same mix of female vocals and spare electronics that would later surface more strongly with Stereolab! These guys are kind of a bridge between that group and the early 80s experiments of Brit ... CD

Ding Dong Songs
Finders Keepers/Cache Cache (UK), Mid 80s. New Copy
CD...$6.99 16.99
Beautiful work from X Ray Pop – a totally wonderful French group from the 80s, and one with the same mix of female vocals and spare electronics that would later surface more strongly with Stereolab! These guys are kind of a bridge between that group and the early 80s experiments of Brit ... CD