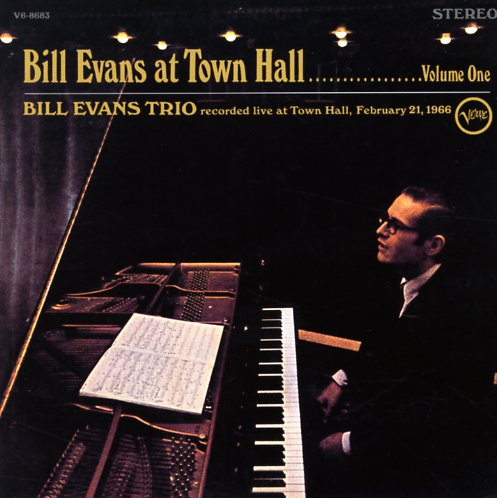 Also available
Bill Evans Trio — Bill Evans At Town Hall Volume One (180 gram pressing) ... LP 36.99
An open-ended live date from Bill Evans – recorded at the auspicious venue of Town Hall, but recorded with a warmth that matches Evans' smaller club sessions of the 60s! The sound here is possibly a bit more focused and direct than some of the moodier, mellower Evans live records – well pointed at the start, but then moving into some gentler chromatic modes as the set moves on – all with gentle accompaniment from Chuck Israels on bass and Arnold Wise on drums. Titles include trio versions of "I Should Care", "Spring Is Here", 'Who Can I Turn To" and "Make Someone Happy" – then Evans takes a 13 minute solo turn, dedicating a suite to the memory of his father!  © 1996-2023, Dusty Groove, Inc.
(Out of print)

Getz Au Go Go
Verve (Germany), 1964. Used
CD...$3.99 (CD...$4.99)
A beautiful dreamy album that's quite different from the classic Getz/Gilberto collaboration – but which also shares much of that set's lyrical beauty! This album was recorded live, in 1964, when Stan Getz was playing with his quartet that included Gary Burton on vibes – an incredible ... CD