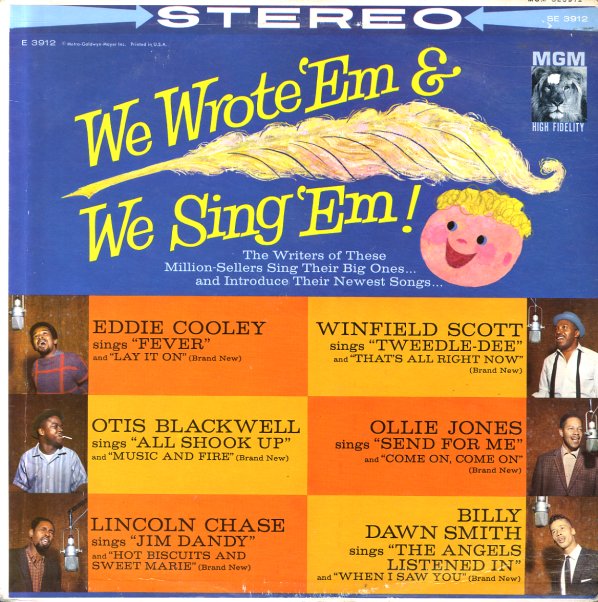 We Wrote Em & We Sing Em

Quite an unusual concept – one that really goes against record company policy of the time! Original writers of big rock and pop hits are given the chance to sing them here on their own – with Eddie Cooley singing "Fever", "Winfield Scott" sings "Tweedle Dee", Otis Blackwell sings "All Shook Up", Ollie Jones sings "Send For Me", and Lincoln Chase sings "Jim Dandy".  © 1996-2023, Dusty Groove, Inc.
(Black label stereo pressing. Cover has some splitting in the top seam and some discoloration from age.)

Eric Burdon Declares War
MGM, 1970. Very Good-
LP...$13.99
War became so popular on their own in later years that it's easy to forget how they first sprung onto the soul charts – here, in an album of many styles that was put together by the wayward Eric Burdon after the dissolution of The Animals. We have to admit that Burdon was a genius to hook ... LP, Vinyl record album

Stand By Me
MGM, Late 60s. Very Good
LP...$2.99
A bit of a gimmick – but a good one! The title track to the album is a famous 6 minute version of "Stand By Me" – one that has Spyder singing the track in styles that imitate Eddie Kendricks, James Brown, Jackie Wilson, Billy Stewart, and others. The rest of the album ... LP, Vinyl record album

Drifters
Clarion, Early 60s. Very Good+
LP...$6.99
Collection of the Drifters' big hits for Altantic, pressed up on their lesser-known subsidiary, Clarion. The material's mostly from the late 50's period, and includes the cuts "Somebody New Dancing With You", "Lonely Winds", "Drip Drop", "Adorable", "The ... LP, Vinyl record album

Odyssey (RCA)
RCA, 1977. Very Good+
LP...$4.99
A crossover classic from the late 70s – a record that was born in the clubs, but bred in the mainstream – and the start of a very good relationship between Odyssey and RCA! The album will forever be known for its classic cut "Native New Yorker" – a seminal groover that ... LP, Vinyl record album