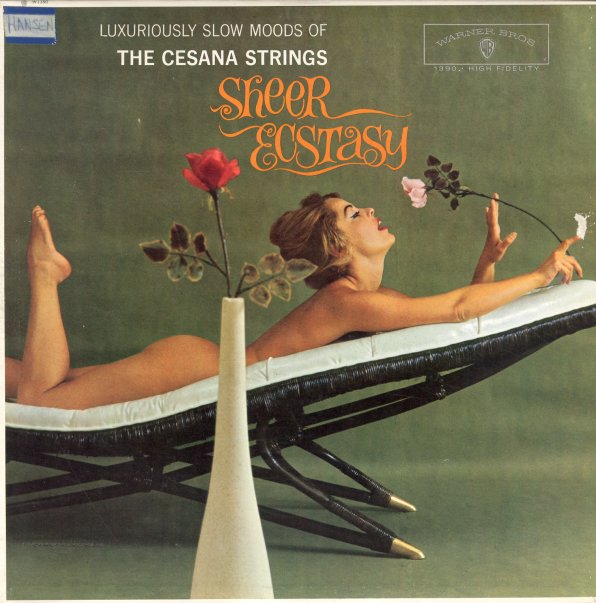 The subtitle for this says "The Luxuriously Slow Moods of...", and it's right! Despite a racy nude on the cover, reclining on a cool chair and smelling a flower, this music is more sleepy than sexy. Still, it's got the rich Cesana sound to it, with banks of strings banking nicely around some moody tracks.  © 1996-2022, Dusty Groove, Inc.
(Mono pressing with deep groove. Cover has a small sticker on one corner and some light wear.)

Photoplay Picks The Great Love Themes From Hollywood
Warner, 1960. Near Mint-
LP...$9.99
Includes themes from Gone With The Wind, Picnic, Razor's Edge, Hurricane, An Affair To Remember, Sabrina, Laura, Love In The Afternoon, Around The World In 80 Days, Lili, Three Coins In The Fountain, and To The Victor. LP, Vinyl record album

Whimsical World Of Irving Taylor
Warner, 1959. Very Good+
LP...$6.99
Nice work from the offbeat easy maestro Irving Taylor – a man with a good sense of humor, as you can guess from the cover – and song titles that include "Separate Bar Stools", "Hawaiian Worm Raiser", "In A Cafeteria With You", "Prison Interior ... LP, Vinyl record album

Make It Easy On Yourself
A&M, 1969. Very Good+
LP...$5.99
Fantastic work by maestro Burt Bacharach – subtle genius, and an album that offers more to us every time we listen to it! Burt's work has been recorded by many – but few ever gave it the kind of treatment that he did – as you'll hear in this brilliant array of sweeping strings, ... LP, Vinyl record album

SRO
A&M, 1966. Very Good+
LP...$5.99
A standing room ovation in the A&M Studios – certainly the kind of reception we'd imagine Herb would get during these glory years of his career! The set's one of the most no-nonsense Tijuana Brass sessions of the 60s – a tightly crafted album that has a bit more jazz than usual ... LP, Vinyl record album