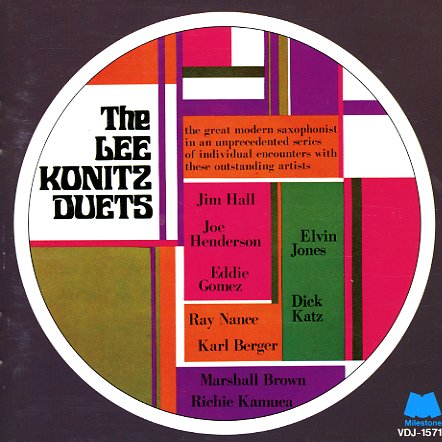 An interesting concept record, with Konitz approaching a variety of material, much of it written by his collaborators, in wide open duet settings. Players include Jim Hall, Joe Henderson, Elvin Jones and Richie Kamuca, and on each piece, both Konitz and his companion have loads of room to extrapolate on the base composition. Perhaps the highlight of the record is to be able to listen to Konitz wrap his warm tone around each piece, and then dance lightly around the melody. 8 numbers, including "Erb" with Jim Hall, "Checkerboard" with Dick Katz, and "You Don't Know What Love Is" with Joe Henderson.  © 1996-2021, Dusty Groove, Inc.
(Out of print.)

Live At Laren
Soul Note (Italy), 1979. Used
CD...$8.99
A cool European set from Lee Konitz – quite different than some of his other material recorded overseas at the time, with a swinging, upbeat feel that's totally great! The group's a nonet – a large ensemble that features Lee on alto and soprano sax, with Ronnie Cuber on baritone, Kimmy ... CD

Night Hawk
Swingville/OJC, 1960. Used
CD...$14.99
Beautiful late work from Coleman Hawkins – mellow genius that wins us over time and time again over the years! The set's actually a twin-tenor outing – with both Hawk and Eddie Jockjaw Davis – the latter of whom, as proved with Johnny Griffin and others, is a perfect partner for ... CD