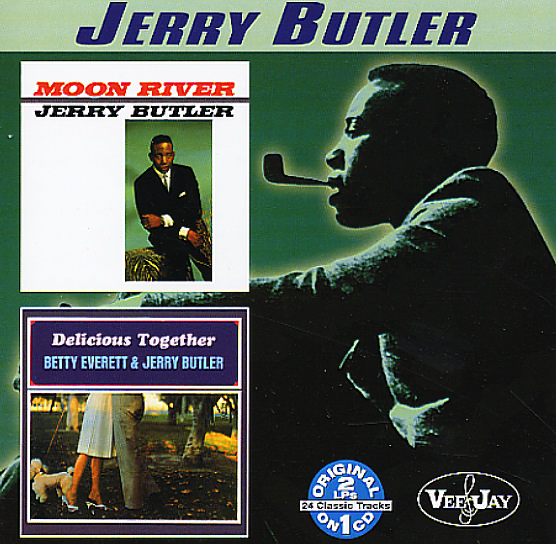 Two soul classics from Jerry Butler! Moon River is an incredible album of sophisticated soul tunes – one that features Jerry's hit single of "Moon River", the first version of the song to chart after Mancini composed it – plus original tunes "I Found A Love" and "Butterfly", plus great renditions of "Where Do I Turn", "Lost Without You", "No End Or Time", "Couldn't Go To Sleep", and "The Challenge". Delicious Together features Jerry in a very big-selling set of soul duets with Betty Everett – some of the first male/female soul tracks recorded in the 60s, and the beginning of a sub-genre that would go on to become very popular. Titles include "Let It Be Me", "I Can't Stand It", "Fever", "Just Be True", "It's All Right", "Ain't That Loving You Baby", "The Way You Do The Things You Do", and "Our Day Will Come".  © 1996-2022, Dusty Groove, Inc.
(Out of print.)

Sweetest Thing This Side Of Heaven
Collectables, 1967. Used
CD...$8.99
A sweet soul classic from late 60s Philly – the one and only album recorded by vocalist Chris Bartley – arranged and produced by Van McCoy! The style's really great – with a host of original tunes by Van that follow nicely in the style of Chris' hit title cut, and which show him ... CD

Doo Wop 45s On CD Vol 7
Collectables, 1950s. Used
CD...$11.99
Music from The Shells, The Charts, The Willows, The Del Knights, The Jesters, Lewis Lymon & The Teenchords, The Crescents, The Visions, The Jive Five, The Charmers, The Sheppards, The Fabulons, The Channels, The Baltineers, The Five Satins, The Legends, The Keynotes, The Rocketones, Jackie & ... CD

Bill Cosby Presents Badfoot Brown & The Bunions Bradford Funeral & Marching Band
Uni/Dusty Groove, 1971. Used
CD...$4.99
A funky masterpiece from Bill Cosby – hardly the sort of record you might expect from all of his years on mainstream TV! This set was cut back when Bill was a much hipper cat on the LA scene – and it was the start of a brief all-instrumental run with his Badfoot Brown ensemble – ... CD