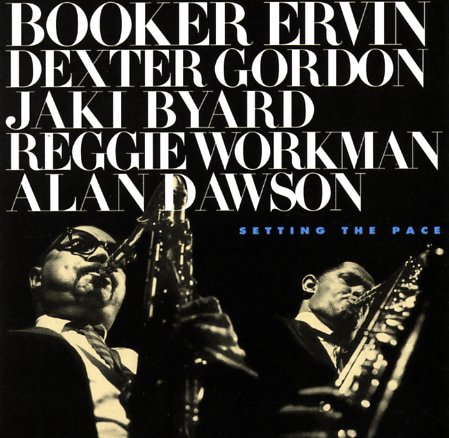 Also available
Booker Ervin — Setting The Pace (plus The Trance) ... CD 11.99
A CD of very long tracks from Booker Ervin – only 4 tunes in all, but each over 15 minutes long! First up is the album Setting The Pace – an album that's one of the most open-ended and jamming sets that Booker Ervin recorded for Prestige in the 60s! The album's a live date from Germany – featuring Dexter Gordon joining Ervin on the stage for some very long, extended solo work – the sort that Dex was starting to do heavily overseas at the time, and which is relatively new territory for Ervin – at least on record. Other players include Jaki Byard on piano, Reggie Workman on bass, and Alan Dawson on drums – but the clear starts of the set are Booker and Dexter – blowing in a range of modern and soulful modes throughout their extended solos. Album features 2 side-long tracks – "Setting The Pace" and "Dexters Deck". Next up is The Trance – an amazing record from the legendary Booker Ervin – and a set that really does a great job of bridging his modernist tendencies and soul jazz roots! The title track – "The Trance" – is an amazing 20 minute number that takes up all of side one of the record – and features Ervin soloing in an incredibly imaginative way – not as boppish as on his set with Dexter Gordon, but more in the powerful-voiced style that he developed with Mingus. The rest of the group features Jaki Byard on piano (always a treat!), Reggie Workman on bass, and Alan Dawson on drums – and side two features a very moody take on "Speak Low". Note that the CD omits the track "Groovin At The Jamboree" from The Trance – due to space restrictions.  © 1996-2022, Dusty Groove, Inc.
(Original pressing – in nice shape!)

Trombone By Three
Prestige, 1949/1950/1951. Used
CD...$5.99
A classic early album on Prestige – and one that features some heavy bop sessions cut for early 78s, all nicely packaged in a great cover by the famous Mad Magazine cartoonist Don Martin! The record features 3 sets of different tracks led by three of bop's greatest trombonists – JJ ... CD

High Pressure
Prestige, 1957. Used
CD...$9.99
Beautiful early work from John Coltrane – recorded in the sensitive company of the Red Garland trio, and with Donald Byrd joining in on trumpet on the frontline! The tracks are longish and open – a bit more directed than the average blowing session numbers, but done with some of the ... CD

Luminescence!
Prestige/OJC, 1969. Used
CD...$28.99
An extremely striking sextet session from pianist Barry Harris – quite unlike most of his other work from the time! The group on the album features Pepper Adams on baritone, Junior Cook on tenor, and Slide Hampton on trombone – and that brace of three horns gives a really solid feel to ... CD

Blues The Most
Contemporary/Prestige, Late 50s. Used
CD...$8.99
Hampton Hawes isn't exactly the first pianist we think of when it comes to bluesy lines in his music – but there's definitely a blue-tinged undercurrent to most of the work in this set – a well-chosen batch of tracks from Hamp's early years as a leader on Contemporary Records! The ... CD