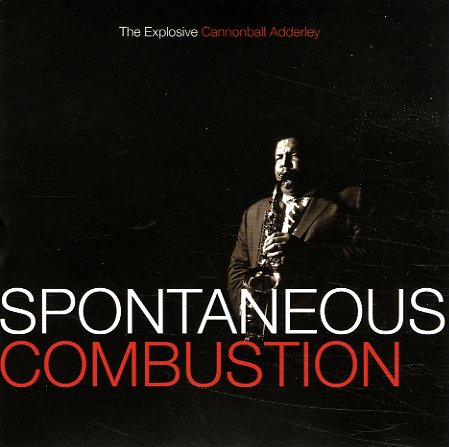 Tracks recorded back in 1955. Adderley and his alto sax are joined by Donald Byrd on trumpet, Nat Adderley on cornet, Jerome Richardson on tenor sax and flute, Horace Silver on piano, Paul Chambers on bass and Kenny Clarke on drums. The tracks include "Bohemia After Dark", "Chasm", "Willow Weep For Me",, "Hear Me Talkin To Ya", "With Apologies To Oscar", "We'll Be Together Again", "Spontaneous Combustion", "Caribbean Cutie".  © 1996-2022, Dusty Groove, Inc.
(Out of print.)

Cannonball Adderley Quintet In Chicago (Japanese paper sleeve edition)
EmArcy/Universal (Japan), 1959. Used
CD...$14.99
A great session from 1959 – one that features John Coltrane playing with the Adderley group, recorded in Chicago when they were stopping through the city with Miles Davis' combo at the time! In fact, since the rhythm section includes Wynton Kelly, Paul Chambers, and Jimmy Cobb – and ... CD

Things Are Getting Better (20 bit remaster)
Riverside, 1958. Used
CD...$11.99
An album that definitely lives up to its title – given the great change and evolution in the style of Cannonball Adderley's music – definitely pointed towards the soul jazz fame to come in the 60s! The group here has Adderley's alto in the company of some all-stars who may not be his ... CD

Money In The Pocket – Recorded Live At The Club In Chicago 1966
Capitol, 1966. Used
CD...$6.99
A great lost slice of Cannonball Adderley from the 60s – material recorded live in Chicago in 1966, but never issued at the time! The performance on the set is a real corker – right up there with any of Cannonball's other live albums for Capitol at the time, and featuring a similar ... CD

Somethin' Else (RVG Remaster Edition)
Blue Note, 1958. Used
CD...$6.99 (LP...$19.99)
A landmark album – even if it was the only session that Cannonball Adderley ever cut for Blue Note! The album was recorded at a time when Adderley was working with Miles Davis – and as such, the session features a group that includes Miles, blowing trumpet in a cool tone that's a ... CD

Homage
Savoy, 2004. Used
CD...$6.99
With David Hazeltine on piano, Jim Rotundi on trumpet, Lou Marini and Lawrence Feldman on flute, and others. CD