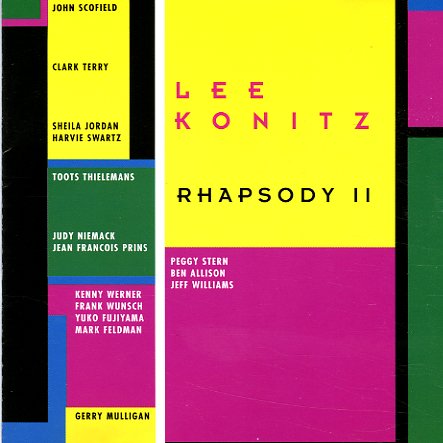 Lee Konitz At Storyville
Black Lion (Germany), 1954. Used
CD...$6.99
Tight early work from Lee Konitz – recorded on location at the very hospitable Storyville nightclub in Boston – a sweet setting for his angular tones on the alto! The style here is great – cutting lines that are incredibly precise, yet crafted with enough soul to keep them from ... CD

Inside Hi-Fi (Koch pressing)
Koch/Atlantic, 1957. Used
CD...$6.99
A gem by Lee Konitz – one of his near-perfect 50s sessions for Atlantic! Lee's tone here is crisp, clear, and hauntingly fresh – modern, yet never academically so – and played with a dexterity that's incredible, but never too in love with itself to go too far. Key players on the ... CD

Jazz From The 1950s
Wave (UK), 1957. Used
CD...$14.99
Essential work by Lee Konitz – an overlooked treasure from his sublime 50s years! The set features a live recording made in 1957 by bassist Peter Ind – then working with the Konitz group, and an engineer with an extremely sensitive ear for Lee's great tone – that crisp and icy ... CD

Lee Konitz In Harvard Square (plus bonus tracks)
Black Lion (Germany), 1954. Used
CD...$7.99
Nothing too academic here – despite the Harvard setting – just clear, clean early work from Lee Konitz – recorded with that crispy edge that he brought to all of his best early work! The album's a treasure all the way through – really amazing stuff, with a sharpness that's ... CD

Heart Is A Melody
Theresa/Evidence, 1982. Used
CD...$11.99
A fantastically soulful set from Pharoah – recorded in the early 80s, with his quartet that included Idris Muhammad on drums, John Heard on bass, and William Henderson on piano. The session is live, and the overall feel is easy and mellow – still searching, as in the best mode of ... CD

Super-Sonic Jazz
Saturn/Evidence, 1956. Used
CD...$6.99 8.99
The first album on Saturn! Despite the futurism that the title of the set might imply, the material on this LP is actually some of Sun Ra's earliest, and dates back to the years when the Arkestra was first beginning to make itself heard in Chicago. That doesn't stop the material from being ... CD