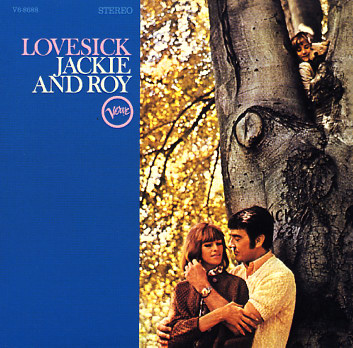 Wonderfully groovy work from the team of Jackie Cain & Roy Kral – a set that has the pair moving into much hipper modes for the 60s, and really taking off from the greatness of earlier records! Backing is still by Roy's core trio, with acoustic piano at the lead – but the addition of electric bass to the lineup really helps the tunes step along nicely – hitting a groove not heard before from Jackie & Roy, with results that are completely sublime! There's a definite bossa influence that comes into some of the best tracks – a skipping, lilting approach to rhythm that's made even better by the unique dual vocals of the team, especially when they're singing wordlessly. But even when lyrical vocals are part of the mix, the sound is still great too – and Jackie & Roy have a way of bringing charm to a tune that few other singers can touch! Titles include "Lovesick", "A Big Beautiful Ball", "You Really Started Something", "Let's Begin", "Mimosa & Me", "Corcovado", "Samba Triste", and "The World Is Your Balloon".  © 1996-2022, Dusty Groove, Inc.
(Stereo MGM pressing with deep groove. Cover has a small index sticker, but is nice overall!)

Time & Love
CTI, 1972. Near Mint- Gatefold
LP...$3.99
An excellent 70s set by Jackie & Roy – very different than their work of the 50s and 60s, with an approach that's much more far-reaching and complicated – a style that opens up their vocal talents majestically! Gone are the simpler ditties of earlier years, and in their place are ... LP, Vinyl record album