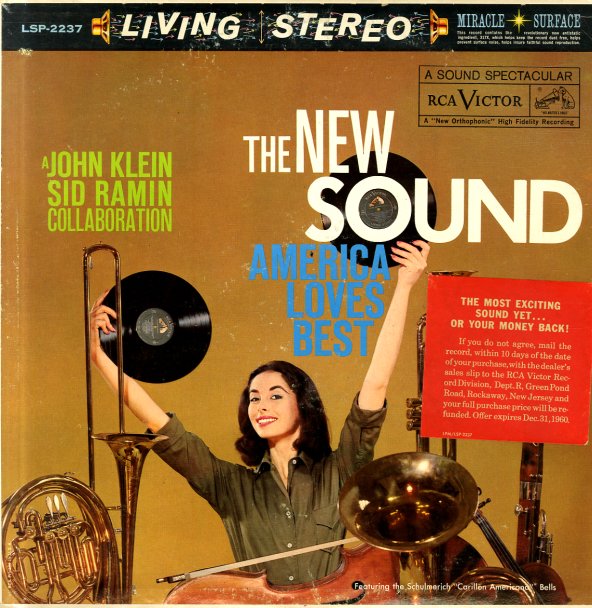 The great bandleader Sid Ramin lays down some goofy orchestrations as a background for John Klein's even goofier showcase of bells. According to the notes, he's got 1,453 of them, and they ring out lound and clear on things like "Jalousie", "Harbor Lights", and "In the Still of the Night". We're not sure if it's really the "sound America loves best", but it's still pretty goofy.  © 1996-2021, Dusty Groove, Inc.
(Stereo pressing with deep groove. Cover has a half split top seam and a trace of a price sticker.)

Music Goes Round and Round
RCA, 1961. Very Good+
LP...$7.99
This is Leo Addeo's entry into the "Stereo Action" RCA series, and is housed in a perfectly preserved white die-cut sleeve with a vivid spirograph type drawing showing through the hole. LP, Vinyl record album

Poe For Moderns
RCA, 1960. Very Good+
LP...$2.99
Although Buddy Morrow's best known for his more crime-jazz and Night Train jazz work, this album's got him sounding surprisingly great in a set of tracks dedicated to the work of Edgar Allen Poe! The feel of the music shifts wildly from track to track – with a few that feature Keith McKenna ... LP, Vinyl record album