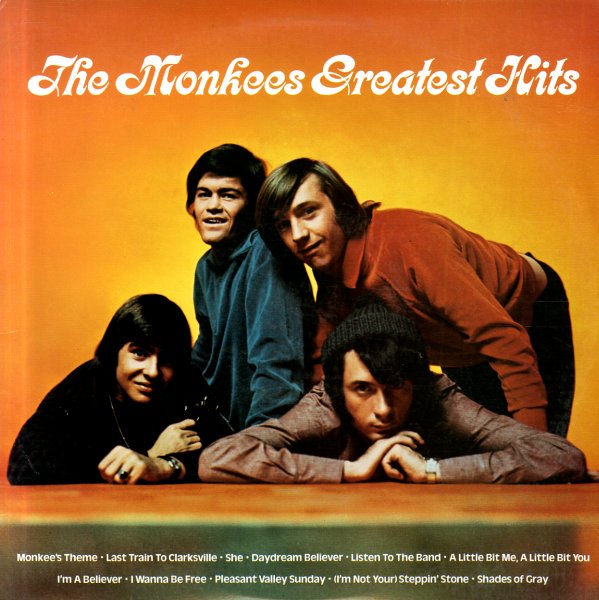 The Monkees had so many fantastic records during their short span of recording, nearly all of them might well be "greatest hits" – but this set does a nice job of slimming the selection down to focus on some of the most long-lasting tracks from the group! There's a few killer Boyce & Hart compositions, produced by the duo too – and the set also features contributions from other 60s pop heavyweights, like Chip Douglas, Neil Diamond, Jeff Barry, and the duo of Carole King & Gerry Goffin – all of whim give the foursome some great material, on tunes that include "Theme From The Monkees", "Last Train To Clarksville", "She", "Listen To The Band", "A Little Bit Me A Little Bit You", "Daydream Believer", "Pleasant Valley Sunday", "Steppin Stone", "I'm A Believer", and "I Wanna Be Free".  © 1996-2021, Dusty Groove, Inc.
(70s issue. Cover has light wear.)

Monkees
Colgems, 1966. Very Good
LP...$9.99
The first-ever album from The Monkees – a set that's overflowing with great numbers from the teams of Boyce & Hart and Goffin & King – plus one original by Mike Nesmith himself! The whole thing's groovy as groovy can be – and despite any thoughts that folks at the time ... LP, Vinyl record album

Pisces, Aquarius, Capricorn & Jones Ltd
Colgems, 1967. Good
LP...$4.99
A fantastic set from The Monkees – maybe the record that really had them coming together and finding that special groove that was all their own! The set features their completely sublime "Pleasant Valley Sunday" – but also has this great range of unusual material that seems ... LP, Vinyl record album