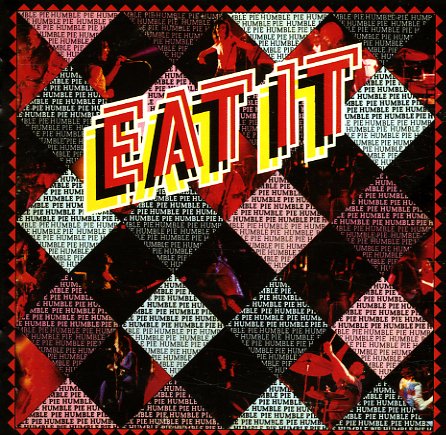 A new taste from Humble Pie – who moved into more of a rock 'n' soul vibe on 1973s Eat It than the more hard rocking previous couple of albums– originally a double LP of studio material on 3 sides a 4th side of live numbers captured at Green's Playhouse in Glasgow. The Clydie King vocal arrangements have plenty of soul, and there's loose, swaggery early 70s vibe that's quite infectious. These later Humble Pie albums are a bit overlooked, but there's plenty to dig here! 15 songs in all: "Get Down On It", "Is It For Love?", "Drugstore Cowboy", "Say No More", "Up Our Sleeve", "Summer Song" takes on the Stones' "Honky Tonk Women", Ike & Tina's "Black Coffee", Holland/Dozier/Holland's "Road Runner" and more.  © 1996-2022, Dusty Groove, Inc.
(Brown label pressing. Booklet has been removed. Cover has light wear.)

Thunderbox
A&M, 1974. Near Mint-
LP...$14.99 19.99
Humble Pie scales back a bit on Thunderbox – a tighter set than the preceding Eat It – but like that album, it's overlooked these days and it has plenty to recommend it! The Steve Marriot's and Clem Clemson's guitars bring the thunder, but the wailing harmonica and the soulfu vocals ... LP, Vinyl record album

Performance – Rockin The Fillmore
A&M, 1971. Very Good+ 2LP Gatefold
LP...$6.99 9.99
Some of the most hard-hitting work ever recorded by Humble Pie – and that's saying a lot, given the power of the group on other albums! The performance is very unbridled – really open-ended, at a level that showcases not just the mindbending early guitar talents of Peter Frampton ... LP, Vinyl record album