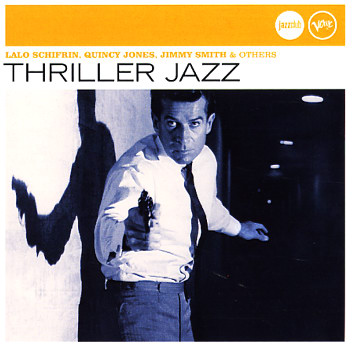 A great take on the Crime Jazz genre – one that focuses strongly on groovier material from the 60s and early 70s, including a fair bit of unusual work from TV! The package really digs deep into the mighty Universal catalog and comes up with a great range of tracks that offer slightly different versions of familiar themes than you might be used to – including a number of key tracks from European labels of the 60s and 70s, used here to round out an already great collection. Titles include "I Spy" by Chaquito, "Peter Gunn" by Sarah Vaughan, "Mission Impossible" by Jimmy Smith, "Hawaii Five O" by Robert Delgado, "Ironsides" by Quincy Jones, "Caught At Midnight" by Peter Thomas, "Dirty Harry" by Lalo Schifrin, "French Connection" by Button Down Brass, "The Untouchables" by John Gregory, "Theme From Shaft" by Alfred Hause, "Gotcha" by James Taylor Quartet, "Lady In Cement" by Paul Desmond, and "Keep Your Eye On The Sparrow" by Sammy Davis Jr.  © 1996-2021, Dusty Groove, Inc.

Jazz Club – Disco Jazz
Jazzclub (Germany), Late 70s. Used
CD...$11.99
Almost more disco than jazz – but that's OK with us, because the grooves are all pretty darn groovy! But this set's hardly the familiar disco you might expect – because like other entries in the Jazz Club series, the tracks are a well-collected batch of unusual sounds from the farther ... CD

Verve – The Sound Of America – Singles Collection (5 CD set)
Verve, Late 40s/1950s/1960s/Early 70s. Used 5 CDs
CD...$43.99
A very fresh look at the music of Verve Records – that legendary jazz imprint that's made wonderful sounds from the late 40s onwards! Verve is well-known as a label for classic jazz albums – work by Stan Getz, Lester Young, Billie Holiday, and many others – but during the company' ... CD

Disco Spectrum – Real Disco For Real People (Compiled By Joey Negro)
BBE (UK), 1999. Used 2 CDs
CD...$19.99
BBE have done it again! They let Joey Negro go crazy, and put together a monster set of his favorite disco tracks of all time – so monster that they had to make the compilation bigger than usual (although they're still giving it to you at a nice nice price!) As you know, Joey's no sleeper ... CD