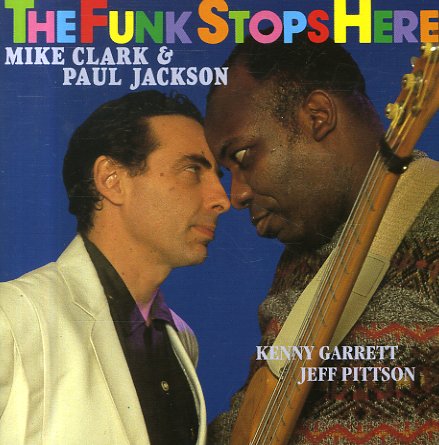 Two members of the legendary Headhunters step out here on a great set of their own – material from a time when Herbie Hancock's ex-backing group were really enjoying a strong revival period! Mike Clark is on drums and Paul Jackson is on bass – and the pair get lots of deft solo work out of saxophonist Kenny Garrett, whose presence here is key to the more soulful side of the record – and nicely balances out the keyboard lines of Jeff Pittson – a player who's using more modern keyboard elements than Herbie used with the group in the 70s, but at a level that still lives up to the jazz funk promise of the group. Titles include "Spider Man", "Swamp Thing", "Steady Freddy", "Jurassic Park", "Pitt & The Pendulum", "Slinky", and "Hotel Domingo".  © 1996-2022, Dusty Groove, Inc.
(Out of print, original German Enja pressing.)

Live At The Village Vanguard
Enja (Germany), 1968. Used
CD...$14.99
Prime post-Coltrane material from Elvin Jones – featuring his "power trio" style of operation, with one great sax player out front, and Jones kicking it in the back with the bass player! In this case, the sax player is George Coleman – who's really finding a voice of his own ... CD