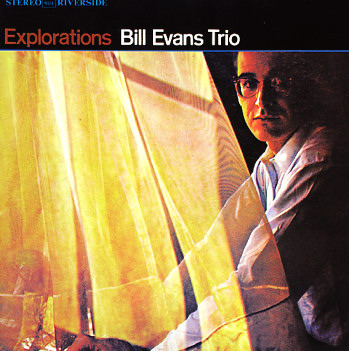 The Bill Evans trio with Scott LaFaro on bass and Paul Motian on drums – a near-perfect lineup that forever raise the bar for jazz piano expression! The title here is certainly apt – because even though many of the tunes are shortish, Evans has a sense of exploration in the way he's approaching the keys – one that still retains some of the lyrically rhythmic traces of his first few records – but which also glides forth into territory that was virtually untapped on record for the time. The revolution here is so subtle, it's easy to miss from the perspective of our generation – but give it a few listens, and the record will open up beautifully! Titles include "Israel", "Haunted Heart", "Elsa", "Nardis", and "I Wish I Knew". 2 bonus tracks "Beautiful Love (take 1)" & "The Boy Next Door".  © 1996-2021, Dusty Groove, Inc.
(Out of print.)

Presenting Ernie Henry
Riverside/OJC, 1956. Used
CD...$14.99
One of the few records ever cut by this fantastic alto player from the mid 50s! Henry most famously worked with Monk, but his albums as a leader are great – and this one features Kenny Dorham, Kenny Drew, Wilbur Ware, and Art Taylor, all components of a totally solid Riverside lineup. The ... CD

Merry Olde Soul
Riverside/OJC, 1960. Used
CD...$16.99
One of the best Victor Feldman albums recorded in the US – a really solidly swinging set of tunes, cut in New York with a hip trio that includes Sam Jones on bass and Louis Hayes on drums – plus Hank Jones on piano, on the few tracks of the album that feature Feldman playing the vibes! ... CD