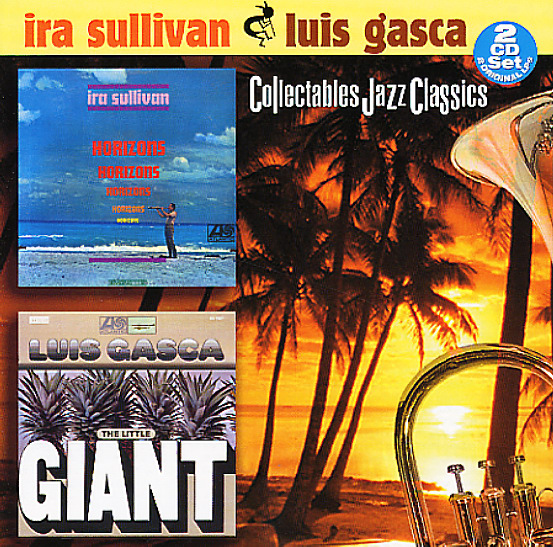 Two great lost titles from the Atlantic jazz catalog of the 60s! Horizons is a beautiful and oft-overlooked album of modal jazz tracks performed by Chicago jazz musician Ira Sullivan – who normally plays trumpet and tenor, but who also here shows his amazing talent on soprano sax. Sullivan plays in a great style that's almost a pop version of Coltrane's spiralling style on "My Favorite Things" – rolling the notes over and over in a beautiful exploratory style. This format works especially well on the set's longer tracks – like "Ninevah", "Horizons", and "Norwegian Wood" – but the whole thing's pretty great! Little Giant is a rare album by the great west coast Latin trumpeter Luis Gasca, and argubly the best album he ever recorded! The set was recorded in New York during the late 60's, and features a great lineup of musicians that includes Paul Griffin on piano, Joe Henderson on tenor, Herbie Hancock on piano, Mongo santamaria on conga, and Bernard Purdie on drums. The style's a mix of soul jazz, Latin, and bits of modal riffing – and the record features some beautiful large arrangements by Gasca and Mark Levine, in a style that's a bit like some of Duke Pearson's work from the late 60s, but handled with a bit more of an edge. Tracks include "Coisa No. 2", "Afro Blue", "Joy Ride", and "Sweet Pea". 2CDs at a nice nice price!  © 1996-2020, Dusty Groove, Inc.
(Out of print.)