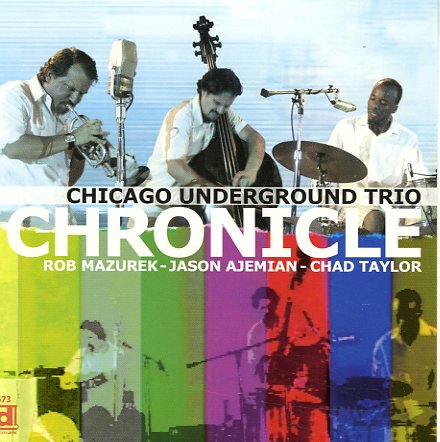 The first-ever live performance from the Chicago Underground team of Rob Mazurek and Chad Taylor – working here as a trio, with bassist Jason Ajemian as a wonderful addition to the group! Ajemian's basslines really dominate the initial part of the set – creating a pulse that draws in the drums of Taylor and cornet of Mazurek – who then both open up on a variety of other instruments, including moog, electric celeste, gong, bamboo flute, vibes, marimba, and other percussion – all used in an almost AACM-like way. Ajemian contributes some electronics to the set, as does Mazurek – but the best sounds here are all acoustic ones – played with an abstracted sensibility that's quite textural, and which furthers the trademark expressions that have made Mazurek and Taylor one of the most compelling jazz teams to come from the Chicago scene in the past few decades. Titles include "Initiation", "Resistance", "Power", "Transformation", "Crisis", and "Transcendence".  © 1996-2021, Dusty Groove, Inc.
(Punch through barcode.)