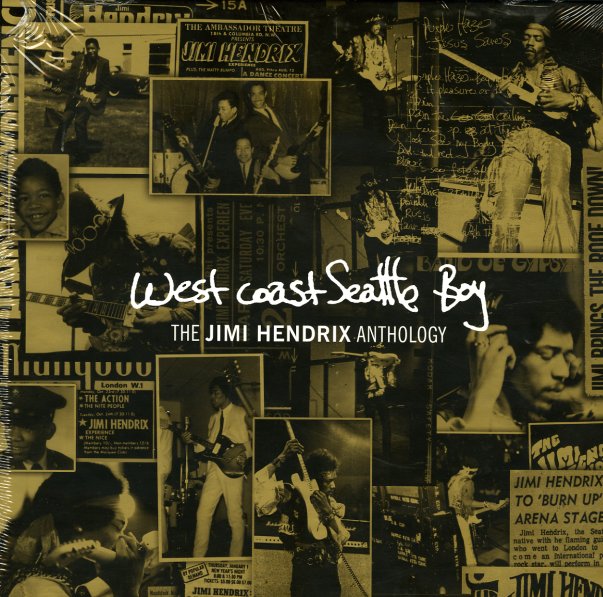 4CDs/DVD
Out Of Stock

An excellent anthology of rare Hendrix – featuring previously unreleased recordings of songs we've never heard from Jimi, alternate recordings of staples, incendiary live recordings and tracks from Jimi's early years as a sideman – plus the full length Jimi Hendrix: Voodoo Child documentary on DVD! It's an amazing set tracing Jimi's roots as a session player for soul stars, through his iconic days as a rock guitar deity. Disc 1 of the 4CD set is the only one that features a wealth of tracks that have been previously released – the remaining discs are heavily weighted with unreleased tracks and alternate versions – tracks from the mid 60s featuring Jimi on sessions for the Isley Brothers, Don Covay, Frank Howard & The Commanders, Little Richard and others. Titles include "Testify" and more with the Isley Brothers, "Mercy, Mercy" and "Can't Stay Away" with Don Covay, "I Don't Know What You Got But It's Got Me" with Little Richard, "Instant Groove" with King Curtis, "My Diary" and "Utee" with Rosa Lee Brooks and more. Discs 2 to 4 features the soul shredding Jimi we know and love – unheard alternate recordings of the classics and much much more, plus rare live recordings and covers. Includes versions of "Fire", "Are You Experienced?", "Can You See Me?", and amazing version of Dylan's "Tears Of Rage", plus "Message To Love", "In From The Storm", "Bolero", "All God's Children", "Everlasting First", "Freedom", "Peter Gunn/Catastrophe", "Suddenly November Morning", live versions of "Stone Free", "Wind Cries Mary", "Star Spangled Banner" and much much more. 59 tracks on 4CDs, with a thick book of notes & photos, and the 90 minute DVD featuring the documentary by Bob Smeaton.  © 1996-2022, Dusty Groove, Inc.
(Out of print. DVD is NTSC, Region 0.)

Nantucket Sleighride (with bonus track)
Sony, 1971. Used
CD...$6.99
Solid jamming from Mountain – one of the tightest guitar-based groups of their day, and hard rockers that could serve up a nice dose of soul! Tunes have a great mix of tight rhythms and fierce guitars – a bit dated at times, but with some nice production overall by Felix Pappalardi. ... CD

Bringing It All Back Home (Japanese paper sleeve edition)
Columbia/Sony (Japan), 1965. Used
CD...$14.99 (LP...$49.99)
Seminal work from Bob Dylan – one of his early electric sides, and a record that moved the singer from folk stardom to an even more explosive force in the mainstream! This is the record that forever made Dylan as influential on rock music as he was on underground styles – and the whole ... CD