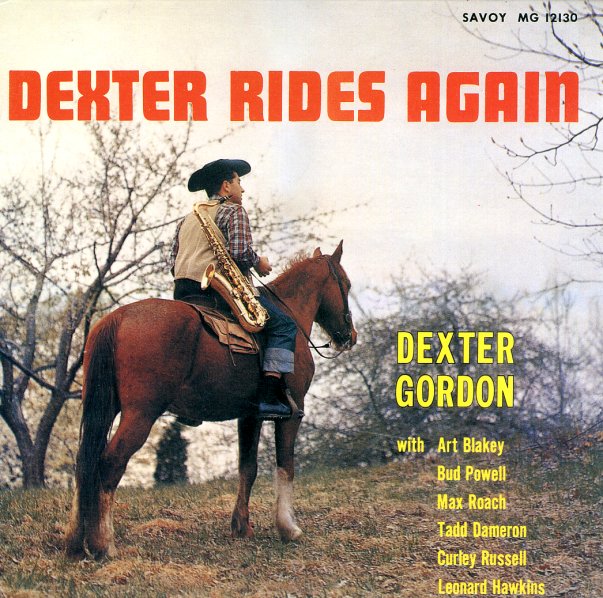 Sophisticated Giant (with bonus tracks)
Columbia/Music On CD, 1977. Used
CD...$7.99 (LP...$19.99)
A really wonderful album from Dexter Gordon's later years at Columbia – and a rare session that pairs larger arrangements with his soulful voice on the tenor and soprano saxophone! Although other players worked often in this mode, the record may well be the only one of its type for Dexter ... CD

Complete Blue Note Sixties Sessions (6CD box set)
Blue Note, 1960s. Used 6 CDs
CD...$84.99
A classic run of albums that kicks off with Doin' Allright and doesn't let up! This set brings together all Dexter's 60's albums for Blue Note, including Landslide and Clubhouse which weren't released until much later in the 70's – plus a great booklet with detailed notes on each of the ... CD

GO
Blue Note, 1962. Used
CD...$5.99
A seminal set of work from the Blue Note scene of the 60s – a record that's not just noteworthy for its role in helping return tenorist Dexter Gordon to the spotlight, but also for the fantastic work of pianist Sonny Clark in the quartet! Sonny's in wonderful form throughout – and ... CD

Biting The Apple
Steeplechase (Denmark), 1976. Used
CD...$16.99
Dexter Gordon blows back home in the US, but still with the long, open solo style of his European work for Steeplechase! The group features Barry Harris on piano, Sam Jones on bass, and Al Foster on drums – a great rhythm section – and titles include "Apple Jump", "A La ... CD

Our Man In Paris (RVG Edition)
Blue Note, 1963. Used
CD...$7.99
One of our favorite Dexter Gordon sessions for Blue Note – and a unique album that's one of the first to illustrate his growing role in the European jazz scene! The group's a quartet – which let's Dex stand out front with plenty of space for marvelous tenor work – and it features ... CD

Bohemia After Dark (Japanese paper sleeve edition)
Savoy (Japan), 1955. Used
CD...$12.99
An excellent hardbop session from the glory days of the Savoy label – easily one of the label's key 50s classics! Drummer Kenny Clarke's at the front of the group – but all players are great, and the set features work by Cannonball Adderley on alto, Jerome Richardson on tenor, Donald ... CD

Opus De Jazz Vol 2 (Japanese paper sleeve edition)
Savoy (Japan), 1960. Used
CD...$34.99
A great lost side from Savoy Jazz – not to be confused with Opus De Jazz Vol 1, the more famous album by Milt Jackson. Like that one, though, this set features a vibist in the lead – John Rae, a strong player who only recorded a few albums, most notably with Herbie Mann. The groove's ... CD