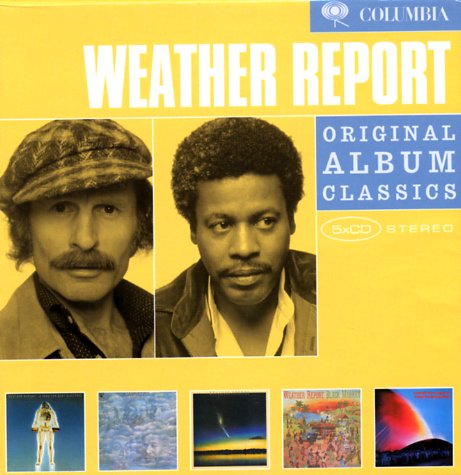 A decade's worth of work by Weather Report – presented in a cool package that features 5 albums in 5 tiny LP-styled sleeves! The music here captures the group at some key points in their career – the mid 70s heights of I Sing The Body Electric and Sweetnighter – and some of the tighter sounds of Black Market, Night Passage, and Mysterious Traveller from the early 80s – a time when the group were still at the top of their game, and better than most of the groups that had sprung up in their wake! The package features a whopping 35 tracks in all – super-group fusion at its best, all at a great price, with a very unique design!  © 1996-2021, Dusty Groove, Inc.

Tale Spinnin
Columbia, 1975. Used
CD...$4.99
A beautiful title for a beautiful little record – one that really does have Weather Report spinning out musical tales in sound – with a free-flowing and soulful sense of energy! The groove's definitely tighter than the earlier years, but it's never slick – and Joe Zawinul handled ... CD

Mysterious Traveller
Columbia, 1974. Used
CD...$4.99 (LP...$19.99)
A new sense of focus in the Weather Report sound – that building, soaring groove that would become the group's trademark in the mid 70s – offered up here in one of it's first and finest examples! The approach is one to describe accurately on paper – but which is instantly ... CD

Tale Spinnin
Columbia, 1975. Used
CD...$5.99
A beautiful title for a beautiful little record – one that really does have Weather Report spinning out musical tales in sound – with a free-flowing and soulful sense of energy! The groove's definitely tighter than the earlier years, but it's never slick – and Joe Zawinul handled ... CD