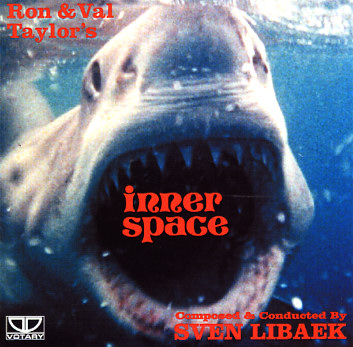 One of our favorite records of all time – an incredible soundtrack from the legendary Sven Libaek, served up in a swirling blend of vibes, flute, guitar, and organ – all with a bubbly, watery feel that's totally amazing! The album's easily one of the greatest from the Australian scene of the 70s – originally penned for a film of underwater adventure, but a treasure trove of groove that easily stands next to any of the best American or Italian soundtracks of the time. Libaek's approach is really unique – almost soft on the attack, which creates a really strong flow in the music – always warm, always rhythmic, and plenty darn groovy – thanks to the incredible instrumentation on the set! Players include Don Burrows and Errol Buddle on flutes, Col Nolan on organ, John Sangster on vibes, George Golla on guitar, and Sven himself on piano – and titles include "Inner Space", "Music For Eels", "Sounds Of The Deep", "Nocturnal Lullaby", "Danger Reef", "Seasnakes", "Midget Monsters", "Beche De Mer", "Attacking Sharks", "Inner Space", and "Turtlemusic". LP features a whopping 16 tracks in all newly remastered from the original master tapes!  © 1996-2021, Dusty Groove, Inc.