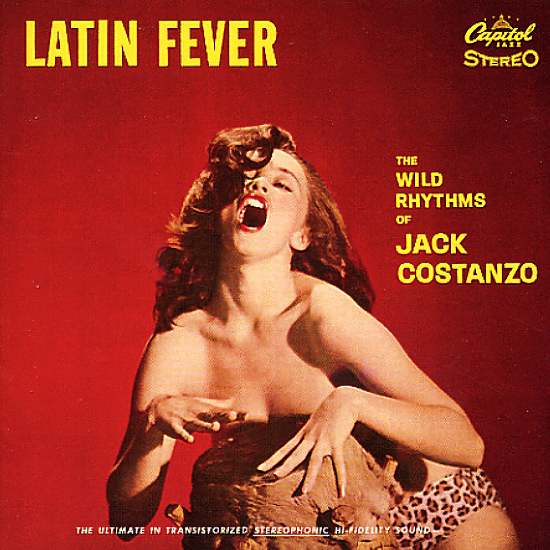 One of the greatest albums of Latin Jazz ever recorded on the west coast during the 50s – and a landmark session from Jack "Mr Bongo" Costanzo! The album well earns its "fever" claim – as the set smokes from the very first note – Jack's bongos calling the pace, moving fast and furiously to pull in a jazzy mix of tenor, trumpet, flute, and piano – the latter of which is played by the great Eddie Cano! The whole thing's wonderful – as compelling musically as the great image on the front cover, and without any of the kitsch, tricks, or gimmicks that could sometimes hurt a session like this. No-nonsense Latin jazz all the way through – and filled with great tracks that include "Hornacopia", "Latin Fever", "Bajo Numero Uno", "Sax Con Ritmo", "Drum a Mania", and "Cumbanchero".  © 1996-2020, Dusty Groove, Inc.
(Black label stereo pressing with deep groove. Cover has light wear.)