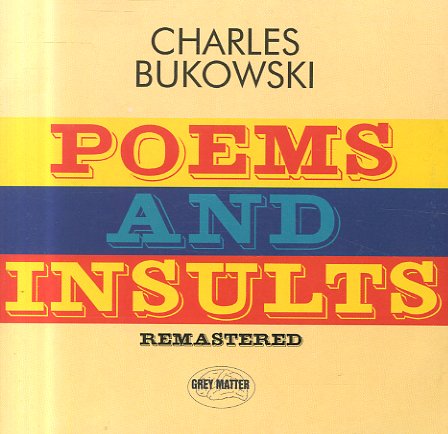 Charles Bukowski in all his glory – reading his own material before a live audience on San Francisco – bringing all his own vocal tones into play with his earthy writing – which makes us love the words even more than in printed form!  © 1996-2021, Dusty Groove, Inc.
(Out of print.)

Have We Told You All You'd Thought To Know?
Cuneiform, 2001. Used
CD...$12.99
Feature poet Robert Creeley performing his own work with a group that includes David Torn on guitar and electronics, David Cast on reeds, Steve Swallow on bass, and Chris Massey on drums. CD

You Can Be Anyone This Time Around
Douglas/Ryko, 1970. Used
CD...$11.99
A wild one from the heady days of Leary's greatness – and a really odd record that's made even more mysterious by the lack of liner notes! Side one features an extended jamming guitar track – "Live & Let Live" – often funky in parts, and with Leary speaking from ... CD

Like A Girl, I Want You To Keep Coming
Giorno Poetry Systems/Rough Trade, 1989. Used
CD...$7.99
Tracks include "Invocation To Papa Legba" by Debbie Harry, "Sister Ray" by New Order, "Just Say No To Drug Hysteria (excerpt) Dead Souls" by William S Burroughs, "Song For The Trees (or) I Know Sometimes The World Is Wrong" by David Byrne, "Tri-Power" ... CD