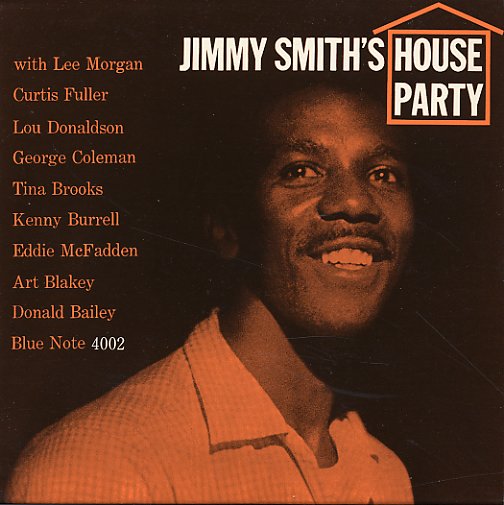 One of the best hard-wailing all-star sessions that Jimmy did so well for Blue Note! The album features an amazing array of top-line players – like Tina Brooks, Lee Morgan, Curtis Fuller, Lou Donaldson, Art Blakey, and Kenny Burrell – and they all play with Smith in differing combinations, all of which have an open-ended groove that sounds very nice, and very much like the kind of material that Smith would have laid down at some small club in the late 50s. Titles include "Blues After All", "Au Private", and "Lover Man".  © 1996-2022, Dusty Groove, Inc.
(Mono 63rd Street pressing with deep groove, RVG stamp, and "ear". Vinyl plays with some crackles. Labels have some pen. Cover has a mostly split top seam and spine, split bottom seam, a name in marker on front, and some ink stamps and notes in back.)

Off The Top
Elektra, 1982. Near Mint-
LP...$6.99
A lean little set from Jimmy Smith's back to basics years of the early 80s – an album that's recorded in a relatively old school soul jazz mode! Jimmy's mostly playing Hammond here – but also uses a bit of Arp strings at times – and the rest of the group members include George ... LP, Vinyl record album