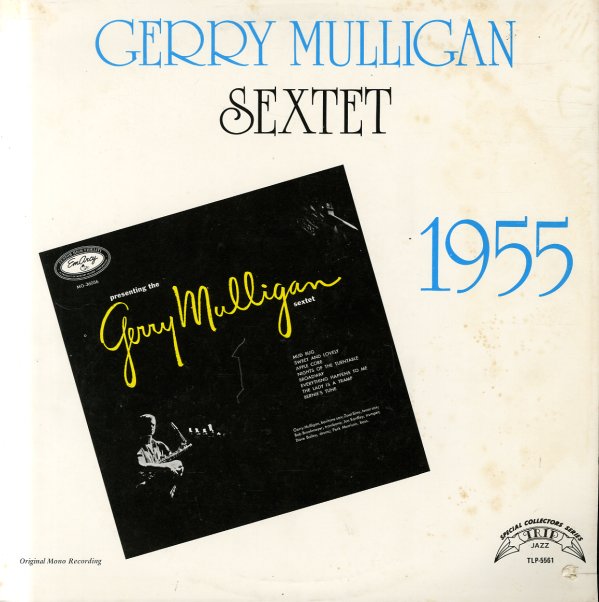 A strong 50s session from Gerry – a bit like some of his work for the Pacific Jazz label, but perhaps a bit more biting and modern. The group's a sextet with Jon Eardley on trumpet, Zoot Sims on tenor, Dave Bailey on drums, Bob Brookmeyer on trombone, and Peck Morrison on bass – and titles include "Nights At The Turntable", "Mud Bug", "Bernie's Tune", and "Apple Core".  © 1996-2022, Dusty Groove, Inc.
(70s pressing on Trip. Cover has a cutout hole and light wear.)

La Menace (80s pressing)
DRG, 1977. Very Good+
LP...$3.99 5.99
Obscure work from Gerry Mulligan – and some of his best of the 70s! The record is a soundtrack for a French film starring Yves Montand, and the soundtrack was handled by Mulligan with assistance from Don Elliott – who brings in a funky style that's quite different than you'd expect ... LP, Vinyl record album

Mulligan Plays Mulligan
Prestige, 1951. Near Mint-
LP...$13.99
Incredible work from Gerry Mulligan – material that predates his better-known west coast sides of the mid 50s! These 1951 recordings are a seminal document of the team of Gerry Mulligan and Allan Eager – offering some of Mulligan's first big impact on the east coast scene before moving ... LP, Vinyl record album

Idol Gossip
Chiaroscuro, 1976. Sealed
LP...$9.99
One of those great overlooked dates from Gerry Mulligan's sometimes-ignored stretch of the mid 70s – a time when he was really trying out some excellent new musical experiments! This cooking set features his baritone in a group that really cooks nicely – and in ways that are quite ... LP, Vinyl record album

What Is There To Say?
Columbia, 1959. Very Good+
LP...$7.99
A beautiful pairing of the baritone of Gerry Mulligan and the trumpet of Art Farmer – brought together wonderfully in this piano-less session that has both players effortlessly carving lines in the open space of the studio. Rhythm is by the team of Bill Crow on bass and Dave Bailey on drums ... LP, Vinyl record album

Paris Concert (60s pressing)
World Pacific, 1954. Very Good+ Gatefold
LP...$6.99 9.99
US issue of some of Gerry's classic Vogue recordings, done in Paris in 1954 with a quartet that featured Bob Brookmeyer on valve trombone, Red Mitchell on bass, and Frank Isola on drums. This is Gerry at the height of his powers, and playing classic piano-less material with supberb accompaniment ... LP, Vinyl record album

Mainstream Of Jazz
EmArcy, 1956. Very Good+
LP...$14.99
Gerry Mulligan's still far from the mainstream of jazz on this sweet little set – a great date that expands nicely from the mellower styles of the Pacific Jazz years – expanding the group a bit, with some really great results! In addition to Mulligan's usual baritone sax, Gerry also ... LP, Vinyl record album

Jazz Combo From I Want To Live!
United Artists, 1958. Near Mint-
LP...$11.99 16.99
This is the small combo recording of tracks from the legendary jazz score to I Want To Live! Although not featured that prominently in the film, the band of Gerry Mulligan, Art Farmer, Bud Shank, and others were a pretty tight little group – even though it was strange to see this west coast ... LP, Vinyl record album

Moods
EmArcy, 1955. Very Good-
LP...$7.99
Perhaps the best-known (and arguably the best) record by Paul Quinchette, and an album that brings his rich tenor solo style into contact with a very tight, very swinging batch of arrangments by a young Quincy Jones. Quincy's got an all-star batch of players backing up Q, including Sam Most, ... LP, Vinyl record album

Study In Brown
EmArcy, 1955. Very Good-
LP...$29.99 (LP...$36.99)
A study in brown, and a study in hardbop too – a seminal album of 50s jazz that forever went on to set the tone for the music! The album was one of a few that trumpeter Clifford Brown cut as his star was strongly rising, before a tragic early accident took his life – and it's a ... LP, Vinyl record album