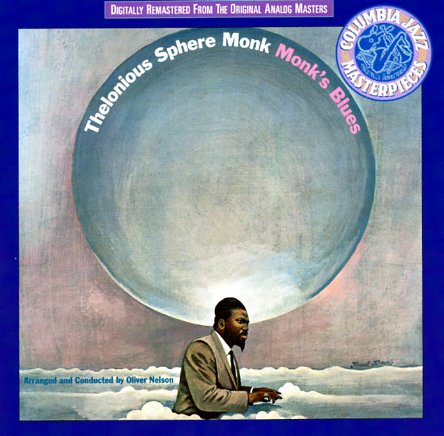 Thelonious Monk meets the mighty Oliver Nelson – the hip bigger band arranger who was helping so many other artists find their groove back in the 60s! The result is less Nelson-led than some of Oliver's other albums of the time – and instead, the arranger is nicely respectful of Monk's core sound – and still manages to led Thelonious keep the frontline strong on piano, and work with familiar players are the core who include Charlie Rouse on tenor, Larry Gales on bass, and Ben Riley on drums. Nelson's touch seeks mostly to augment the Monkish lines with some larger horn shadings – sometimes a bit upbeat, but never more swinging than Monk might want. There's enough of a blue tone here to keep this one nicely in line with the rest of the 60s Columbia catalog for Thelonious – and titles include "Monk's Point", "Consecutive Seconds", "Let's Cool One", and "Rootie Tootie". CD features 2 bonus tracks – "Blue Monk" and "Round Midnight".  © 1996-2021, Dusty Groove, Inc.
(Punch through barcode.)