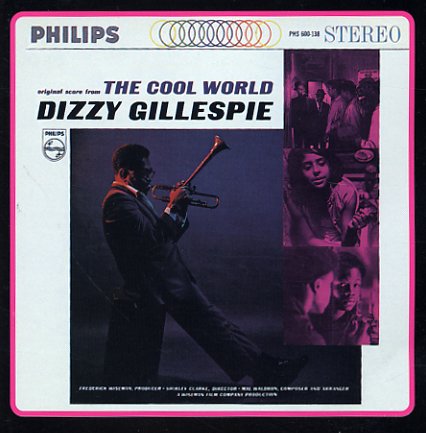 Nice one! Dizzy did the soundtrack for the lost Shirley Clarke verite drama The Cool World – a beautiful black and white film shot mostly on location in the Harlem of the early 60s. Mal Wladron wrote the material for the score, and Diz plays the music with a moody emotionality that you don't often hear in his other 60's work. The recording was made by his great group that included Kenny Barron and James Moody, and the titles include "The Pusher", "Duke's Fantasy", "Coney Island", and "Enter Priest". The CD also features the groovier Dizzy Goes Hollywood, which features the same group doing jazz readings of 60's soundtrack themes like "Carioca", "Never On Sunday", "More", and "Walk On The Wild Side". The whole thing's got 22 tracks in all, and is a very cool slice of Dizzy's career that you'll be hard pressed to find on vinyl!  © 1996-2023, Dusty Groove, Inc.
(Out of print.)