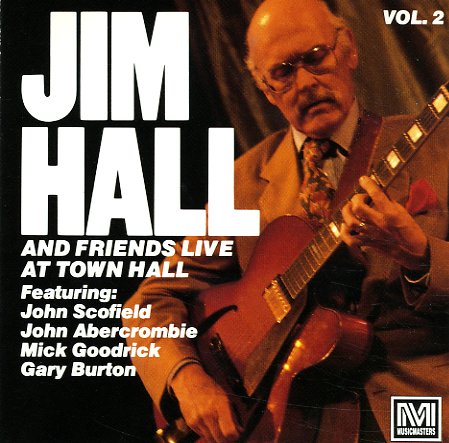 Jim Hall on guitar, Gil Goldstein on piano and synthesizer, Steve LaSpina on bass, and Terry Clarke on drums.  © 1996-2022, Dusty Groove, Inc.
(Out of print.)

It's Nice To Be With You – Jim Hall In Berlin (Japanese paper sleeve edition)
MPS (Japan), 1969. Used Gatefold
CD...$24.99
A wonderful album from guitarist Jim Hall – different than some of his other work, and with a slightly harder edge! The unique session has him playing in an MPS 60s mode – more straight-on than some of his more airy moments – with a sound and tone that still recalls his work with ... CD

Concierto
CTI, 1975. Used
CD...$6.99
One of Jim Hall's most compelling albums from the 70s – a mix of lightly swinging tunes and more complicated numbers, recorded with some of his best partners from earlier years! Chet Baker is on trumpet, Paul Desmond is on alto sax – and the rest of the group includes Ron Carter bass, ... CD

Yesterdays
Flying Dutchman/BMG (France), 1974. Used
CD...$18.99
A beautiful record from Gato Barbieri – almost a return to more traditional forms, but still graced with the searching, burning quality that made most of his early 70s sides so great! The tracks are all long and exploratory – and have Gato blowing with that tremendous tenor tone – ... CD