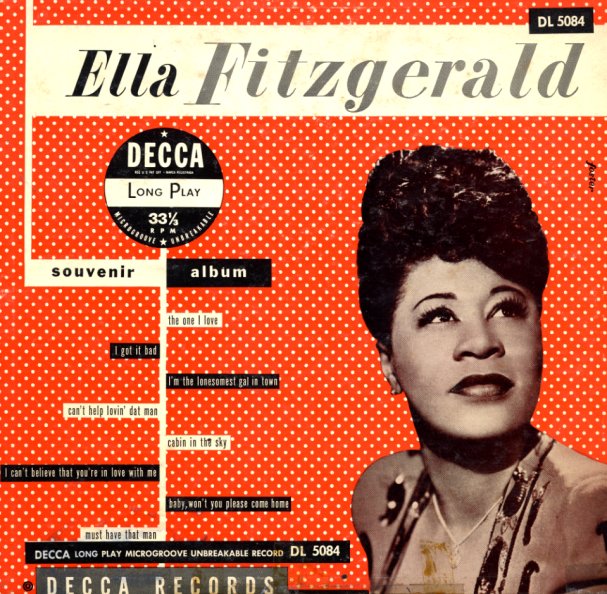 Includes "I'm The Loneliest Gal In Town", "Baby Won't You Please Come Home", "I Got It Bad (And That Ain't Good)", "Cabin In The Sky", "Can't Help Lovin' Dat Man", and more.  © 1996-2022, Dusty Groove, Inc.
(Black label pressing with deep groove. Vinyl is foggy from oxidation and plays with surface noise. Cover has some wear and aging, with masking tape holding the seams, and several pieces of clear tape underneath.)

Ella In Berlin – Mack The Knife
Verve, Early 60s. Near Mint-
LP...$14.99
Quite a popular live album from Ella – recorded in Berlin at the height of the cold war years – featuring a famous recording of "Mack The Knife" that almost blew away Bobby Darin's hit with the cut! The album's nicely free of some of the stodginess of some of Ella's Songbook ... LP, Vinyl record album

Blue Moon
Decca, 1956. Near Mint-
LP...$19.99
Some of the hippest early work ever cut by Carmen McRae – with backings by Tadd Dameron and Jimmy Mundy, and a great selection of songs that brings out all the sophistication in Carmen's style, yet stays away from overly-done standards and love numbers. The set's a perfect example of how ... LP, Vinyl record album

It's A Lonesome Old Town
Decca, 1956. Very Good
LP...$9.99
Dreamy late night vocals from Kitty Kallen – singing here in a style that's much more sophisticated than her pop country stuff (like "My Coloring Book"), with arrangements by Jack Pleis that are in a very sweet and lonely mood. The tracks are a strange mix, but Kitty's lonesome ... LP, Vinyl record album

Facets/The Legend Of Leon Thomas
Flying Dutchman, 1973. Near Mint- Gatefold
LP...$14.99
A tasty compilation of Leon Thomas' work for the Flying Dutchman label – work that's clearly his best over the years, and which retains the original style of spiritual soul jazz that he pioneered with Pharoah Sanders. The groove here runs from open-ended soul jazz to some tighter numbers ... LP, Vinyl record album

At The Village Gate
Colpix, 1961. Near Mint-
LP...$29.99
An album recorded relatively early in the career of singer Nina Simone – but a set that already shows the very unique approach that would make her a legend by the time the 60s moved on! Even the very first tune is a stunner – a haunting reworking of the favorite "Just In Time" ... LP, Vinyl record album

Pastel Blues
Philips, 1965. Near Mint-
LP...$99.99
Wonderful stuff from Nina Simone – working here still with one foot in the jazzier style of early days, but with haunting elements of the later progressive style to come! The "pastel" in the title shouldn't imply any sort of softness on Nina's part, because if anything, she's ... LP, Vinyl record album