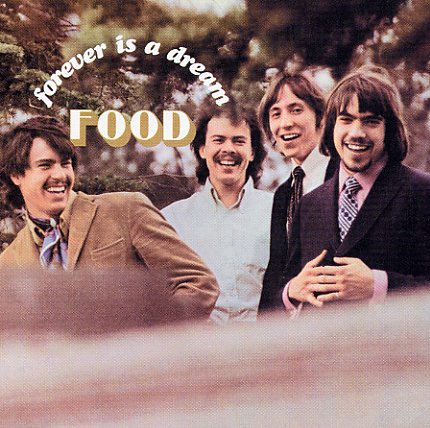 Forever Is A Dream

A beautifully baroque bit of psychedelia from the late 60s – the only album recorded by the group Food, a sad and somber batch of tunes that really stands out from the pack! The core quintet is augmented on the set by some larger arrangements that mix in strings and horns – really opening up the sound into territory that's somewhere in the neighborhood of groups like Gandalf and The Left Banke. The set was recorded in Chicago at the mostly-soul Ter Mar Studios, done with a wonderful juxtaposition of styles that we never would have expected – and which gives the record a depth that's kept it pretty darn fresh over the years! Titles include "Naive Prayers", "No", "Lady Miss Ann", "Leaves", "Marbled Wings", "Inside The Mirror", and "Forever Is A Dream".  © 1996-2022, Dusty Groove, Inc.
(Lime green label pressing. Vinyl plays with some surface noise and crackles. Cover has a cutout hole, some ring and edge wear, and lightly bent corners.)